India is slowly and steadily developing into a sports crazy nation. Sports fans in the country are finally looking beyond cricket as the sole sport they love and are coming out in support of other sports and athletes.

The affluent people of the country have realised the potential benefits of owning a sports team and have jumped into the sports bandwagon by buying some of the world-class teams across various sports. Here, we look at some of the Indian billionaires who owns some or the sports team: 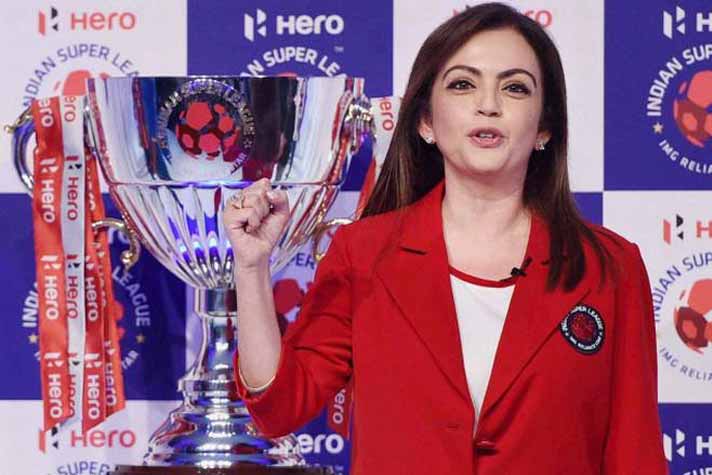 Nita Ambani is one of the biggest backers of ISL Owned by the second richest man in India, Gautam Adani, the Adani Group is a multinational conglomerate based out of the western city of Ahmedabad. The Adani Group owns their home-based team, Gujarat Fortune Giants in the Pro Kabaddi League. The Jindal Steel and Power Limited is a steel and energy company based in the city of Hisar in Haryana. With a sports-loving top brass, the Jindal group owns a total of three teams across various Indian leagues. The group owns the Delhi based franchise, Delhi Capitals in the IPL, the fan favourite Bengaluru FC in the ISL and their home-based kabaddi side Haryana Steelers in the PKL. The chair of India’s third largest cement producing company, Shree Cements, Benu Gopal Bangur has an estimated net worth of over USD.7 billion according to the Bloomberg Billionaire Index. Bangur recently invested in the ISL team East Bengal FC and owns a whopping 76% stake in the team. A mass media company headquartered in the southern Indian city of Chennai, the Sun TV Network owns one of the most consistent IPL teams, Sunrisers Hyderabad since the team was first incorporated in the league in the year 2012. An Indian conglomerate which primarily deals in the poultry industry, animal pharmaceutical and health products, the VH Group owns the English Football Club, Blackburn Rovers since the year 2010.