EXCLUSIVE: Indian footballers in an Indian League — How Sergio Lobera is revolutionising ISL 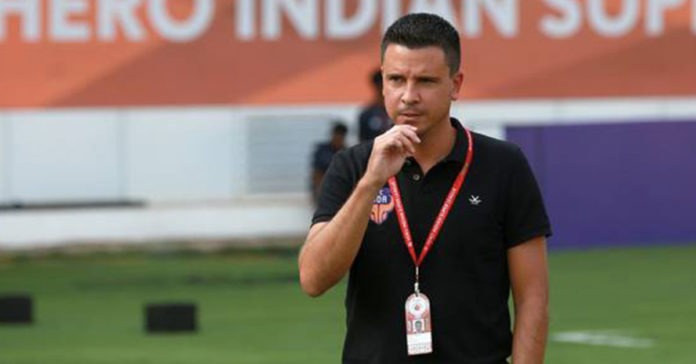 For long, the Indian domestic football scene has been dominated by foreign footballers. Be it Chima Okorie or Jose Ramirez Barreto, Diego Forlan or Asamoah Gyan, since the 90s, Indian clubs have relied on footballers from outside the country, more than they have on those within.

With the advent of the Indian Super League (ISL) the emphasis on signing marquee foreign stars increased further. Clubs went running behind the likes of Bastian Schweinsteiger, Ronaldinho, all but rumours and ended up signing some of the biggest former superstars of world football — Roberto Carlos, Nikolas Anelka, Florent Malouda, Luis Garcia, Robbie Keane, to name a few.

Take ATK for example. They have one of the strongest Indian group of footballers in the whole country. From Pronay Halder to Komal Thatal, from Pritam Kotal to Michael Soosairaj, from Balwant Singh to Jobby Justin, they have the perfect mixture of youth and experience when it comes to domestic players. However, during matches, they rely on their foreign stars, Roy Krishna, David Williams, Javi Hernandez for making the attacking forays while Jobby, Balwant and Komal warm the bench.

All but one — Sergio Lobera’s FC Goa.

Ahead of their first match of the ongoing season against two-time champions Chennaiyin FC, Lobera had a couple of things to worry about. Firstly, Ahmed Jahouh, perhaps his most indispensable player, was missing due to suspension. On top of that, Edu Bedia and Hugo Boumous – the two most creative players – were sidelined due to injuries.

But Lobera was not perturbed. He had faith, faith on his other players. The Spanish coach, who has worked with an impressive list of clubs before coming to India, named just three foreigners in his starting eleven with a bench consisting of an all-Indian roster, four which were players from their development side. The Indian unit repaid their coach’s faith by delivering a stellar performance helping the team outclass Chennaiyin FC 3-0.

“My job is to not only win trophies but also improve the level of the Indian players. We have to give the youngsters a chance to come and play at the level. Not only that but also to instil confidence in them that they can play well,” says Lobera, in an exclusive interaction with The Bridge.

“It is very important to have quality Indian in the team,” he adds. “With 6 players being Indian, they compose of more than 50% of the team. The club is focussed on giving the Indian players a chance, a platform where they can truly shine. And it makes me happy when I see the Indians improving. I am personally very happy with the quality of the Indian players we have in our squad.”

Indeed, his faith in the local lads is second to none. Since Lobera came in, three FC Goa players — Brandon Fernandes, Mandar Rao Desai, Manvir Singh — have broken into the Indian national team setup. Jackichand Singh, as well, forged a comeback into the squad. But the Spanish coach feels that’s not the end of it. He believes others like Lenny Rodrigues, Seriton Fernandes can make it to Igor Stimac’s fold.

“I feel even players like Lenny and Seriton are very good candidates to the in the national team as well.​ There are also youngsters coming through the ranks like (Mohammad) Nawaz,  (Saviour) Gama, Princeton (Rebello) and Liston (Colaco) coming through the ranks that are sure to knock on the doors of the national team soon,” Lobera says, his words reverberating trust and faith.

Apart from just bringing in Indians and giving them an opportunity to play at the biggest stage, credit must go to Lobera for utilising them properly. The ISL has seen many Indian players being forced to change positions to accommodate the foreigners. Lobera, on the hand, has made changes to bring out the best from his players.

His most vital change being shifting Mandar and Seriton to inverted full backs from wingers. When asked about their progression, the head coach explains how he helped initiate a similar transition for Jordi Alba during his time at Barcelona.

“They (Mandar and Seriton) are very important. We play attacking football and for that, the demand on the full backs is pretty high. In Barcelona, I helped initiate a similar transformation with Jordi; the same with Dani Castellano at Las Palmas. The full backs are crucial as they need to maintain a balance between our game going forward and tracking back. ​The play starts from the back and the build-up plays a crucial role. Each and every member of the team is a vital cog to the system,​” Lobera says stressing on the last line.

‘I would like to win both ISL and Super Cup’

It’s hard to believe that it has just been two seasons that Lobera is here. When he arrived, he had to start from scratch. All the big stars had left, it was a whole new team with a new boss at the helm. To build a team competitive enough and not only that, to build it from nothing — the task at Lobera’s hands was huge.

Still, Goa made it to the semis that season. In Lobera’s second season as the head coach, he guided his team to the ISL final, where they lost narrowly to eventual champions Bengaluru FC.  Now, in his third season as the FC Goa boss, the 42-year-old believes that his players are now completely aware of how he likes to play.

“When I first came in, we had only one outfield player who was retained. It was a whole new team and it becomes very difficult to impose your ideas and your style. Heading into my third season, the players have a good knowledge of how I would like to play. So that is really important,​” Lobera says.

“But saying all that, it is something that is not impossible. I am an ambitious coach and I love the challenge that this season presents,” he elaborates when asked how he plans to emulate last season’s success. “I would like to win both, of course. That’s what we are all working towards,” he adds.

Our republic is going through a crisis. The idea of India- a product of centuries of evolution that should not be subject...
Read more Kapil Choudhary - January 23, 2020
This is Part 2 of a four-part series explaining the procedure to travel to Tokyo during the Olympics. The series will cover all aspects of the trip such as tickets (prices as well as purchase process), accommodation, flights, land transportation, sightseeing and food so...
Read more