The concept of fitness has nothing to do with your weight or body size, but how resilient and strong you are. However, in today’s standards, the understanding of fitness has transpired to be the socially construed notion of your body size. A plus-size person more often is deemed unfit where every other individual aspires to be lean and slender.

Stemming from similar beliefs, people attribute yoga to lean-shaped individuals. Tossing those illusions straight into the trash can, 37-year-old media professional Dolly Singh is proving time and again, yoga is for everyone — regardless of age, weight and body structure.

An ardent adventure enthusiast, Dolly went for a trek in Hampi, Karnataka, eight years back where she had sprained her ankle. Worrying that her legs might not be able to take her weight, Dolly consulted a doctor after coming back to Mumbai. Though her weight never perturbed her, Dolly considered paying heed to his doctor’s advice of losing a few kilos. “I realised living an active life was the key, and hence, I tried almost everything from running, aerobics, Zumba but got bored in the end,” said Dolly in an interview with The Bridge.

“I probably was there for three or four months, and then I started my own doing yoga at home. I spent time on YouTube finding good tutorials and kept practising the postures. This is how I fell in love with yoga and since then I haven’t looked back. I am mostly self-learnt and do it for my own benefit. I probably don’t have the pedigree to be an instructor, but I am a hard-core practitioner of yoga,” said Dolly.

Starting at the age of 33, Dolly has never really seemed age as a constraint in yoga. She exuberantly smiles when asked about her challenges and reveals, “In fact, yoga has made me feel younger, and I feel more healthy these days. I am a competitive person, and yoga has given renewed confidence.” 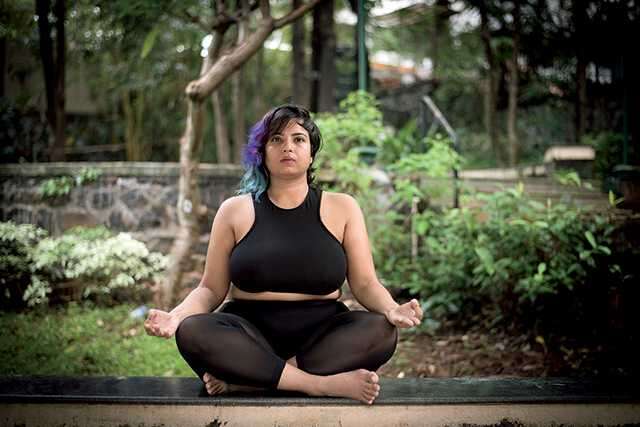 From the beginning, Dolly has documented her progress on her Facebook and Instagram profiles and over the years she has won many followers who have been influenced by her feat. She is an advocate of body positivity and goes by her Facebook page ‘Yoga For All’. However, she has also faced criticism and trolls for her videos and photos, about which she couldn’t care less. “Yoga is a very personal thing to me, I don’t wish to be a social media influencer. As much as I feel happy that my pursuits are influencing others and they are supporting me, I am least bothered about the trolls which are hurled upon me. I would say, women are more than their body, and I do yoga for fun.”

When asked about her regime and the benefits she has achieved, Dolly adds, “I find time for yoga and make sure I do it at least five times a week for almost an hour. As you need complete focus on yoga, my physical strength has translated into mental strength. With time, I have got more comfortable with my body.”

In 2017, Dolly walked the ramp at the Amazon India Fashion Week for Milind Soman’s clothing brand Deivee. She felt such a platform was really required for being the conversation-starter against the set beauty standards.

“The society has imposed an unnatural beauty standard for women, which I believed should be done away with and I am proud that I am being able to promote a positive culture. The encouragement I receive online drives me to keep on going as I really don’t pay heed to the negativities,” Dolly concludes.

Dolly wishes to keep motivating others and pursue all her goals unabashedly and live to her fullest.

"There would be seven matches between four teams in the women's IPL and Jaipur is likely to host them," a senior official has said.
Read more
128,656FansLike
11,072FollowersFollow
6,621FollowersFollow Md Imtiaz - February 18, 2020
With the Asian Wrestling Championship and Barcelona Spain Masters badminton kickstarting, we will be looking at the big sports updates happened on 18 February 2019.
Read more

Smriti Mandhana has ability to make an impact like Viv Richards:...