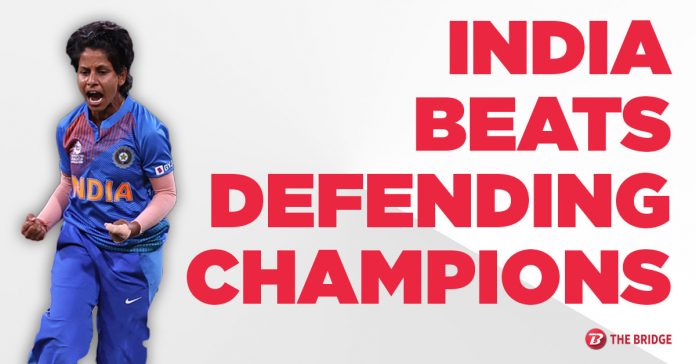 Leg spinner Poonam Yadav did the star turn as India got off to a brilliant start in ICC Women’s World T20 Cup 2020. The Indian eves beat defending champions Australia in the opener by 17 runs in a clash that was highly contested by the two sides.

It was the hosts who won the toss and put India to bat first, a tough challenge considering it was the first match of the campaign.

Smriti Mandhana survived two scares early on but she settled down and alongside Shafali Verma gave the team a quick start. However, the Indians could not take advantage of it.

Australia managed to pull back during the powerplay overs only, snatching two wickets. Soon captain Harmanpreet Kaur was also dismissed, a bit unfortunate with the ball ricocheting off the wicket keeper’s pads before hitting the stumps.

Deepti Sharma and Jemimah Rodrigues then steadied the ship with a well-balanced partnership. In fact, Deepti remained unbeaten on 49 to take the score to a respectable position. The Australians needed 133 to win from 20 overs, not a mammoth task considering their batting prowess.

The #AUSvIND #T20WorldCup opener heading towards an interesting finish.

Alyssa Healy proved just that as she started smashing the Indian bowlers all around right from the start. The first breakthrough came when Shikha Pandey outwitted Beth Mooney early on. Even as Healy went about her onslaught at one end, wickets kept falling at the other courtesy, Poonam Yadav’s superb bowling display.

The wily leg spinner rocked through Australia’s middle order, finishing with figures of 4-0-19-4. She dismissed both Healy and the dangerous Ellyse Perry to bring India back to the match and almost took a hattrick.

Taniya Bhatia, behind the stumps, was also outstanding through Australia’s innings, pulling off some neat catches and terrific stumpings.

With wickets falling at regular intervals, the Australians found it tough to get going and struggled to keep up with the asking rate.