Leg-spinner Poonam Yadav has played a massive role in two of India’s three wins so far. 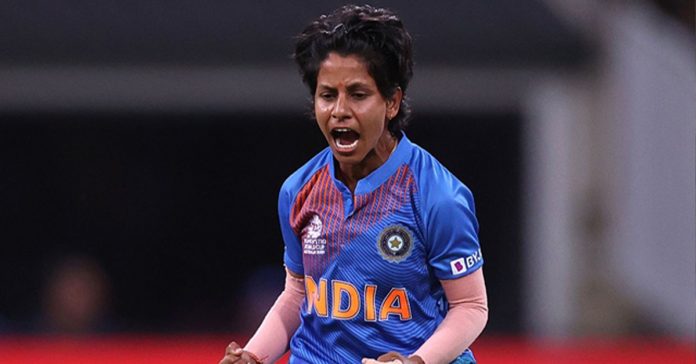 Indian women’s cricket team has really come to the party at the 2020 ICC Women’s T20 World Cup being played in Australia. The Indian eves have played like a well-oiled unit and are now looking good to progress to the knockout phase from Group A after maintaining a clean slate in the big-ticket event with wins over Australia, Bangladesh and New Zealand. Leg-spinner Poonam Yadav has played a massive role in two of India’s three wins so far, finishing with returns of 4 for 19 in the team’s stunning 17-run triumph over defending champions and hosts Australia as well as snaffling 3-18 in the team’s 18-run victory over Bangladesh.
The 28-year-old leggie carries a rich T20 World Cup experience, featuring in her fourth T20 World Cup since making her debut in the 2014 edition in Bangladesh. The Agra girl was clearly the difference between India and Australia as she provided the crucial breakthroughs in the middle overs to snuff out the challenge of the reigning champions. Poonam first dislodged the well-set opener Alyssa Healy for 51 in the tenth over of the innings, and from therefore opened the Aussie floodgates snaring Rachael Haynes, Ellyse Perry and Jess Jonassen in quick succession to drive out any kind of resistance the Aussies would have otherwise offered.

Poonam again struck three telling blows in the 11th over, 16th over and 18th over against Bangladesh to help India script another pugnacious victory when it appeared that the Bangladesh girls could turn the tables on us. With eight wickets in the bag, the leg-spinner is the team’s top wicket-taker at the 2020 ICC Women’s T20 World Cup.

It may not be an exaggeration to suggest that Poonam has been India’s bowling mainstay in the T20 format over the last few years – she was the country’s top joint wicket-taker in the 2018 ICC Women’s T20 World Cup in West Indies, where she picked up 8 wickets from 5 games alongside Radha Yadav who also snared 8 wickets. Interestingly, in her T20 World Cup debut at Bangladesh in 2014, Poonam was again the country’s top wicket-scalper with 8 wickets from 5 games. Even at the 2017 ICC Women’s World Cup in England, Poonam led the Indian bowling department from the front, finishing with a haul of 11 wickets from 9 games at an economy of 3.86. Poonam is India’s top wicket-taker in the T20 format with 93 wickets from 65 matches since making her T20 debut seven years back.

The success of the leg-spinner at the 2020 ICC Women’s T20 World Cup is a story of sheer determination and tenacity amidst adversity – it was only in the last week of December 2019 that Poonam underwent a surgery on her ring finger on her non-bowling hand on account of which she could not play in the Australia Tri-Nation Women’s T20 Series – the final outing before the World Cup. However, despite knowing well that she won’t be able to bowl in the Australia Tri-Nation Women’s T20 Series, the team management decided to take her to Australia. “It was good for Poonam’s morale that she travelled along with the team for the Australia Tri-Nation Women’s T20 Series when it was clear that she will not be in a position to play in that series. It worked well for her,” says Poonam’s personal coach and former Uttar Pradesh cricketer Manoj Kushwaha.
Kushwaha, who has been honing the skills of Poonam since 2010, said enhanced variations has been key to Poonam’s success in the ongoing the 2020 ICC Women’s T20 World Cup. “When I started training Poonam in 2010 she did not have adequate variations in her bowling but in the last few years or so she has really worked on her variations. She is a very hardworking cricketer and very disciplined and whatever she has managed to achieve is due to all the efforts put in during the off-match period.”

Poonam’s personal coach, who runs the Thrive Cricket Academy in Agra, believes the cricketer getting the opportunity to work closely with former national women team coach Ramesh Powar and current bowling coach Narendra Hirwani has helped in a big way. “Ramesh Powar himself is a spinner of repute and Narendra Hirwani is another stalwart and Poonam getting to train under them has worked to her advantage.”

Surprisingly, Poonam has decent batting skills but has only batted nine times in 65 T20 internationals, scoring just 12 runs. Her coach feels that the leggie has better batting attributes than what the stats suggest. “She used to score a lot of runs playing in the middle-order while playing for the Uttar Pradesh under-19 team. I still remember how Poonam stitched a thrilling last-wicket stand with Ekta Bisht to help India beat England at Nagpur in April 2018. So she can surely bat,” concluded Kushwaha.
Indian women cricket buffs would hope that Poonam maintains her rich vein of form in the knockout phase and propel the country to its first-ever T20 World Cup glory.

One of the pioneering figures of Indian women's cricket, Shantha Rangaswamy holds the records of many first to her name. She was the first...
Read more
131,874FansLike
12,448FollowersFollow
7,257FollowersFollow