Dear Sachin Tendulkar, you lost a fan today!
By

We often epitomise our dreams in people and make their standards our benchmarks. And in between our unwavering reverence, our heroes ascend the throne of gods and demigods. It is through hard ways we've learnt that our heroes falter. For our sporting gods, we tend to overlook their poor performances, setbacks and defend them for their acts. But what do we do when they forgo humanitarian values and compassion?

I would probably never ever be able to cherish the figure 18,426 again. The figure (runs scored in ODIs) is the embodiment of the pious toil Sachin Tendulkar has ploughed on the 22-yard. All idol-worship and devotion took a few seconds to crash when a colleague forwarded a screenshot of Sachin's tweet on Whatsapp. It was on the same lines that a batallion of other Twitter superstars had posted.

India’s sovereignty cannot be compromised. External forces can be spectators but not participants. Indians know India and should decide for India. Let's remain united as a nation. #IndiaTogether #IndiaAgainstPropaganda

India’s sovereignty cannot be compromised. External forces can be spectators but not participants.

Indians know India and should decide for India. Let's remain united as a nation.#IndiaTogether #IndiaAgainstPropaganda

What was the tweet meant for? To whom was it addressed? Without the context, the words sound like a firm statement against a foreign invasion, or some hostile separatist forces. Only if it was true. His tweet is only directed towards everyone who has ever been concerned about the farmers of the country. Sachin's tweet is merely a mockery towards the farmers who have been seeking their bragging rights from the government, protesting against the centre's three controversial laws, which they say will leave them at the mercy of corporates.

Social media across the world woke up to the ongoing farmers’ protests, one of the largest mass mobilisations in India in recent times. All it took was a single tweet by a pop star Rihanna to make a difference. Rihanna tweeted a CNN article highlighting the internet ban in parts of Delhi to suppress farmers’ voices.

why aren’t we talking about this?! #FarmersProtest https://t.co/obmIlXhK9S

It resulted in other celebrities aside, UK MPs Claudia Webbe and Tanmanjeet Singh Dhesi, US Foreign Affairs Committee member Jim Costa and even climate activist Greta Thunberg spoke in favour of the protests. Rihanna’s tweet also elicited a passionate response from Meena Harris, who, while highlighting the internet shutdowns and state violence, cautioned against remaining silent against “fascist dictators”.

Rihanna’s tweet shouldn’t have mattered. While the world took notice, trolls and supporters – of varying levels of fame – got to work. Besides slut-shaming her, they glorified and justified the violence that was once meted out to her: “Chris Brown” began to trend on Twitter India, with the RW trolls sharing images from Rihanna’s 2009 domestic violence case with captions that she “deserved” being assaulted.

Rihanna’s tweet had a ripple effect all over the nation. As a response, the Ministry of External Affairs resorted to quickly release a statement about their assumed “vested interest groups” who have managed to “mobilise international support against India”. Without much ado, Bollywood’s epitome of patriotism, Akshay Kumar, quickly tweeted out his support of the MEA’s statement. He was followed by Sunil Shetty, Ekta Kapoor and Karan Johar.

"If Bollywood comes, can cricket be far behind"

Cricketers slowly joined the bandwagon of the tweet using the ever-patriotic #IndiaTogether #IndiaAgainstPropaganda hashtags. Sachin Tendulkar was at the forefront of the Twitter movement, which was backed by other stalwarts of Indian cricket including Anil Kumble, Gautam Gambhir, Ravi Shastri, Shikhar Dhawan among others.

The only sportsperson Bharat Ratna's tweet again echoed the spinelessness of India’s sports stars when it came to standing up for anyone against authority came to the fore. Since November, thousands of farmers have encamped outside New Delhi, protesting and keeping vigil in sprawling tents. The protest has laid bare the dire reality of inequality across much of the country. More than 60 per cent of India’s 1.3 billion people still depend primarily on agriculture for their livelihood, though the sector accounts for only about 15 per cent of the country’s economic output. Their reliance has only increased after the coronavirus pandemic badly struck the urban economy and sent millions of labourers back to their villages.

As the world's largest democracy, India is more than capable of taking her internal issues to amicable solutions. Onwards and upwards. #IndiaTogether#IndiaAgainstPropaganda

For years, debts and bankruptcies have been driving farmers to high rates of suicide. The demonstrators are demanding that Prime Minister Narendra Modi to repeal recent farming laws that would minimize the government’s role in agriculture and open more space for private investors. The government says the new laws would unshackle farmers and private investment, bringing growth. But farmers are skeptical, fearing that the removal of state protections that they already consider insufficient would leave them at the mercy of greedy corporations. While our farmers fought for their rights, sustaining many deaths, our esteemed cricketers kept mum about the plight, only to one day speak in the favour of the government whose inefficiency has lead to this chaos. 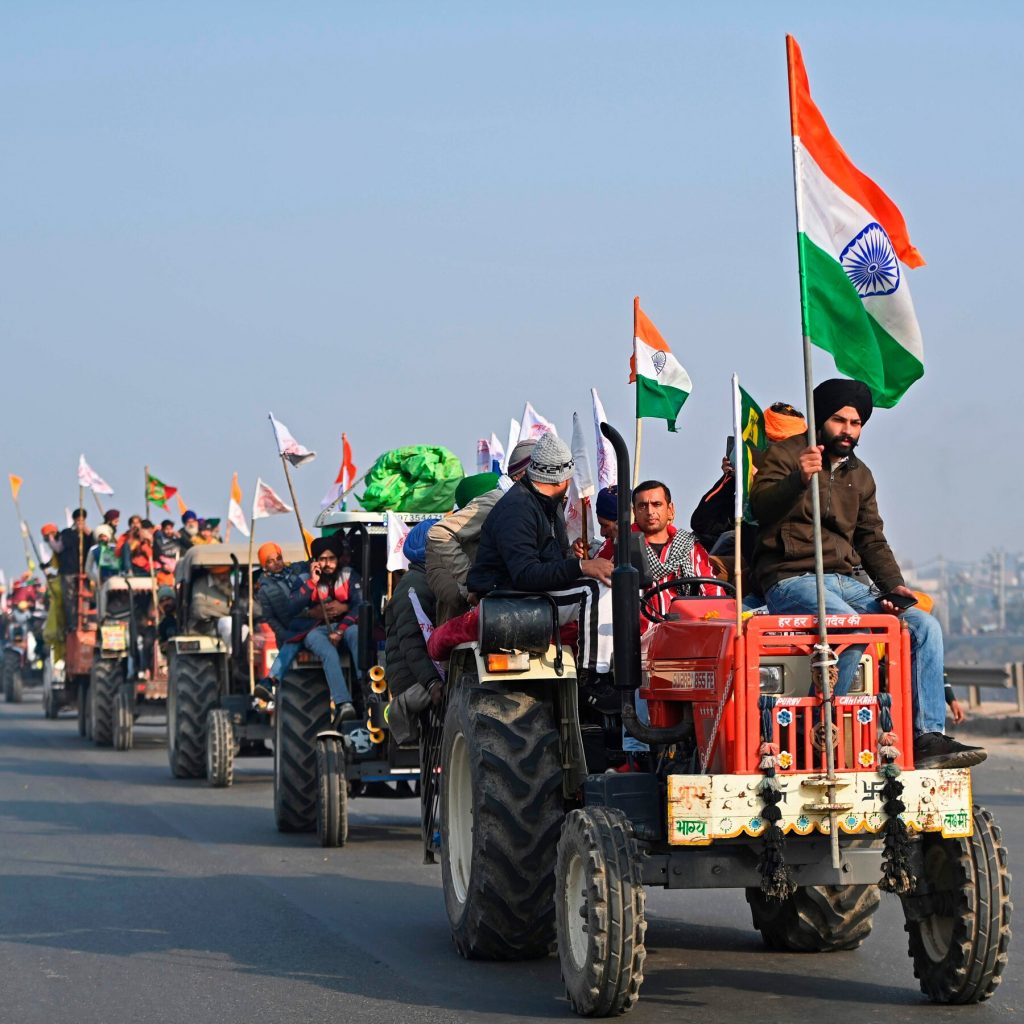 A scene from farmer's rally in India (Source: NewYorkTimes)

Tendulkar's tweet in favour of the people in the authority, makes me hark back to the days when he was a member of the Rajya Sabha in India. During his tenure, Tendulkar had kept himself away from voicing thoughts when issues of national importance like these are created an uproar across the country. Those athletes who are privileged with power and position in the country, decorated by a massive fan following, can at least voice their opinions for the marginalised in times of crises. Yet they chose to stick to the populist sentiment

When you talk about reform in agriculture, in an agrarian economy, not taking farmers into confidence is the worst sin any government could commit. The three farm bills presented in the lower house on September 17 was hailed as a great reform by the members in the government is because the yes-man attitude towards corporates is the only thing that will keep them in the fray. Unfortunately, this attitude is harming not only the social fabric but the political fabric as well. The only stakeholder that will benefit of the farm bills are the corporates. More corporate entities will connect with the farmer, not to change the farmer’s fate but their own. The stalwarts of Indian cricket are indirectly taking a stand for the corporates who also happens to be the biggest players in the Indian sports ecosystem. For instance, Reliance and Jio owned by Mukesh Ambani are one of the biggest stakeholders in the both Indian Premier League (IPL) and the Indian Super League (ISL). Former Mumbai Indians, captain Sachin Tendulkar served as the icon player for the franchise Mumbai Indians, owned by Nita Ambani. While Sachin Tendulkar called time on his playing career in 2013 from IPL, he has been connected with the iconic franchise in some or the other way.

Also read: Should Indian athletes raise their voice on matters of social justice?

Does apathy come from privilege?

Indian cricket icons have deservingly won many accolades and amassed wealth from the most-rewarding sport in India. Their apathy towards farmers can be the culmination of their privilege they enjoy in their fine living conditions. It was rare, but only a few of the cricketers from rural upbringing and farming backgrounds - Harbhajan Singh, Mandeep Singh, Irfan Pathan lent their support to the farmers.

Whereas, a barrage of wrestlers, boxers, athletes including, Olynmpic medallist Vijender Singh, Sushil Kumar; World Champion medallists Bajrang Punia, Vinesh Phogat have been constantly speaking for the farmers. This stark difference quite remarkably reflects the background each player have been coming from.

Muhammad Ali did fight for his beliefs even at the cost of his trophies and Jackie Robinson made news for breaking the racial segregation in baseball by becoming the first African-American to play in the Major League Baseball in 1919 but the incidents were all too sporadic. However, this soon gained momentum until it became almost impossible to turn a blind eye. Like the pull out of Sean Dolittle from attending a ceremony in the White House after Washington Nationals won the World Series, or the outburst of Megan Rapinoe in 2019 when she termed Trump’s office as corrupted and refused to take her World Cup-winning USA women’s football team to meet the President or Colin Kaepernick’s infamous kneel during an NFL game to protest against racism or police brutalities, all of it created a major stir. All these stars broke away from protocol and used their position to influence lives and stand up for what they truly believed in. Even at the cost of fines, jeers or, in Kaepernick’s case, being called unpatriotic.

Unless you are living under a boulder, you will know, India is burning. From a punctured economy, to Citizenship Amendment Act and now the draconian farm law; today, more than ever the country needs its role models to take a hard stand, and today more than ever, the land needs like-minded beings to quell fear, communal disbalance and stand up to maintain and protect the very essence of India. This India also belongs to the farmers as much as the corporates and servicemen. Every time an icon is silent, every time they support this government's stand towards the famers, they should introspect whether they also believe farmers to be terrorists and Khalistanis?

The views expressed are of the author and not of the organisation.