10 documentaries which will give "live sports action" feel

Here we list 10 amazing sports documentaries that give the 'live sports action' feel.

At a time when Coronavirus has taken over the world and all sports events, bar a few, around the world has been suspended, the average sports lovers find themselves bored. With no Premier League, or badminton tournaments or cricket, weekends have never been so dull.

How to spend those weekends? What to do when you are doing 'Work From Home'? What to Netflix and chill? Here we list 10 amazing sports documentaries that give the 'live sports action' feel:

A tennis fan can never miss on this one. The plot revolves around ‘what it is to face Federer’ in a match. A legend of the sport, Federer has a lot of fans all around the world who want to know how people react around such a personality and no other documentary could have shown it better.

A cinematic rollercoaster brings fresh revelations on the life of one of the most famous personalities of the sporting world, Steven Gerrard. Driven by an all-consuming desire to deliver for the people that would ultimately take him to the very edge. It becomes really difficult to think of this sport in the same as you did before watching this documentary. You can watch it on Amazon Prime Video. The series takes you back to one of the most epic rivalries in the tennis world and captures the essence of both the tennis players at its best. Borg’s blue-collar roots, his brutal workout regimen designed to build the stamina to outlast opponents; McEnroe’s upper-middle-class upbringing, a virtuoso talent who liked to train by playing doubles matches. Also, what drives attention is the fact that Borg’s trademark cool is not something that is natural for him.

The first episode starts with the visuals of Inside Borussia Dortmund where the viewers gain an outlook on how the people behind the team – the physio, the bus driver and kit manager – are going about their jobs. You get a perspective of the actial team that runs the on ground team, but that usually gets lost in the daily media onslaught of articles solely focussing on the team’s last or upcoming match. At the start of the episode both officials and players talk about the upcoming Rückrunde and the season so far with the backdrop of how the team has developed after the attack on Borussia Dortmund’s team bus ahead of the club’s planned Champions League match against AS Monaco in April 2017. You can watch it on Amazon Prime Video. 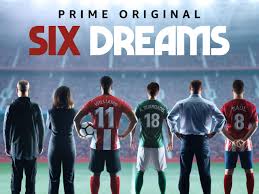 This series focuses on the survival of a team in La Liga tournament and what it actually means. All the six players have different stature and the series potrays the perspective of all these six players. Switching perspective between grass-root players, coaches, managers and owners, Six Dreams is a comprehensive and oftentimes fascinating insight into one of the most revered leagues in the world. You can watch it on Amazon Prime Video.

Available on Amazon, this takes you to the time when Leeds narrowly missed out promotion to the premier league. Argentine Bielsa is front right and center who took over as manager in the summer of 2018 and having earned a reputation as one of the greatest coaches in world football during stints at Newell's Old Boys, Athletic Bilbao, Marseille and the Chile national team. You can watch it on Amazon Prime Video.

#4 All Or Nothing - Manchester City A series narrated by renowned actor Ben Kingsley English Premier League side Manchester City's progress was charted through their 2017–18 season, in which they won two of four contested trophies and broke a series of Premier League performance-related records. It is no less victory for the Man City fans to see the journey of the their favourite team and get access to the dressing room environment. You can watch it on Amazon Prime Video.

#3 Formula One - Drive to Survive:

Formula one races are known to be one of the most exciting to watch and it becomes even more thrilling to watch the live-action. But not everyone gets to have the live-action feel so Netflix in collaboration with Formula One team created a documentary where you can feel intense behind the atmosphere of the scene and actually feel the lives of the top players in the Formula One team. You can watch it on Netflix. If there were a near-perfect representation of how popular cricket is in India, this series can be the reference. It shows how the shortest format has brought together a family under the name of a team, Mumbai Indians. The owners of the cricket team mix the required amount of awe, mystique and energy into this series. You can watch it on Netflix.

This is a docu-series that leads you inside the changing dynamics of the Australian Cricket team after a new coach, Justin Langer comes into view. It is the process of rebuilding a whole unit from scratch when two of the most experienced batsman made an exit from the team. Smith and Warner both were stripped of captainship after their involvement in the ball-tampering controversy and then coach Dareen Lehman also resigned and then it was Langer who builds the new team with Tim Paine as the captain. You can watch it on Amazon Prime Video.