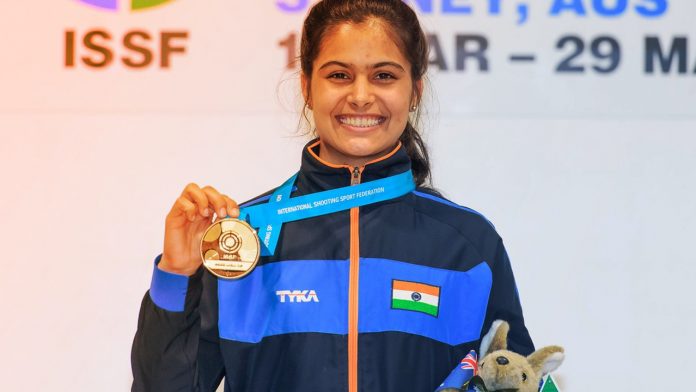 India shooters made a dream start on Day 4 with Manu Bhaker winning the Gold medal in the Women’s 10m Air pistol while her fellow country mate Heena Sidhu finished behind her claiming rights on the Silver medal! Meanwhile, Ravi Kumar won the Bronze medal in the Men’s 10m Air rifle event.

Debutante Manu Bhaker produced a remarkable performance recording a total of 240.9 points and setting up a new Commonwealth Games record. On the other hand, Heena recorded a total of 234 points. Australia’s Galiavbovitch was third by a fair distance, ending her day with 214.9 points and settling for the Bronze.

It was an all-Indian show in the fight for the Gold medal position, and the last few rounds witnessed the cut-throat competition between the two. Manu Baker fired 10, 10.3, 10.6 and following it up with a massive 10.9 to get out of reach from its competitors. Her final shot registered 10.4 and confirmed her top place podium finish!

The 28-year Heena was also clinical in her performance with her final fires recording 10.1, 10.1, 9.1 and 9.7 to end as the second best in the competition. She had previously won the Gold medal in the event in 2010 when the mega event was held in New Delhi.

This is really a proud moment for the 16-year old Manu Bhaker from Haryana’s Jhajjar District. She has been in phenomenal form in the past two years winning the 2017 Asian Junior Championships and also winning the Gold medal at the International Shooting Sports Federation World in Guadalajara, in Mexico earlier this year.

Also read: Jaspal Rana: Showing the way for the future of Indian Shooting

The 16 year old- prior to the phenomenal run in the finals, had qualified by virtue of a high score which, incidentally, was the qualification record in history of Commonwealth Games. In doing so, she broke a long-standing 12 year record previously held by the prominent Kazhak born Australian international, Dina Aspandiyarova. She scored 388 to qualify.

Ravi Kumar could have finished in a better position considering the fact that he was leading at some point, but his final two shots allowed Bangladesh’s Abdullah Hel Baki and Dane Sampson to fight for the Gold. Australia’s Dane Sampson finished with a score of 245, setting up a Games record. Abdullah followed behind him with 244.7, while Ravi Kumar accumulated 224.1 from his chances.

India is currently at the third position in the medals tally with a total of 10 medals- 6 Gold’s, 2 Silver and Bronze each. Shooting is one of the disciplines where India has the potential to win multiple medals. So far, Indian shooters have secured 3 medals, hopefully, more will follow!

The joint secretary of National Rifle Association of India, Pawan Singh, has been re-elected as the member of the Judges committee of the International...
Read more
News

Manu Bhaker has undoubtedly emerged as one of the brightest shooting prospect for India in recent times. The 18 year old pistol shooter rose...
Read more
News

India’s Visnu Shivraj Pandian, on Sunday, pocketed the $500 prize money after winning the bronze medal in the online Champions of Champions event of...
Read more