How RB Ramesh’s prodigy Praggnanandhaa is conquering the chess world

One of the basic exercises Grandmaster Ramanathan Ramesh asks his pupils at the Chess Gurukul Academy in Chennai to follow is to diligently watch Chess videos so that they can grasp what other players are doing, which are the moves they are making and which of those moves are working on their favour. The drill is to watch at least ten videos every day.

"Often during class, when I follow up with students whether they have watched 10 videos or not, many of them tell me that they couldn't watch 10 because of school, studies, homework and other regular work. However, I was once astonished by Pragnanandhaa's answer. He told me he had been watching 30 videos every day. I was even surprised, but that is the exact dedication you need to be a champion chess player. I am amazed by his zeal to learn and how he can sacrifice everything for chess" says Ramesh, whose student Rameshbabu Praggnanandhaa is the wonder kid of Indian chess. 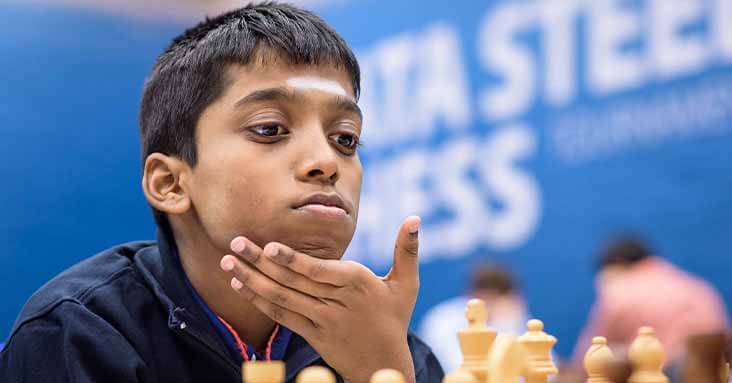 Ramesh became a coach at the age of 32 soon after winning the Commonwealth Championship in 2007 and quitting a well-paying job with Indian Oil Corporation (IOC). In 2019 Ramesh got the FIDE's Mark Dvoretsky Award 2018, for best trainer of juniors or a team in a juniors event. His academy Chess Gurukul has produced several chess masters and his students have won 45 Gold medals in World events.

India recently won their first-ever Chess Olympiad and interestingly Praggnandhaa was rated as the best performer in the tournament for board 5 and 6 respectively during their Pool A outing. He won all the five games he played in the Olympiad. Pragg, who recently turned 15, is now widely recognised as one of the brightest emerging prodigies in the world of chess, but that he was made for the game was evident almost immediately after he began playing it.

Praggnanandhaa’s journey in chess started at the age of three after his sister Vaishali R was enrolled in a chess class to wean her off television. Vaishali became an international master at 15. Praggnanandhaa, who grew up battling his sibling on the board, started beating her at her own game in a few years. At five, he was playing tournaments. Two years later, Pragg was Under-8 world champion.

"Praggnandhaa came to my academy at the age of eight. I could see his passion in the game from the very beginning, and he was willing to go the extra mile to learn things. I gave him pressure, but he could easily handle it," recalls Ramesh.

At ten, Pragg was the youngest International Master (IM) in history. At 12—in June 2018—he became the second-youngest person ever and the youngest Indian to achieve the GM norm (his record was broken in January 2019 by D Gukesh, also a Chennai boy).

Praggnanandhaa takes a bus or an auto rickshaw to his coach’s academy, an hour away. There, he spends 4-6 hours working on his game. Afterwards, he unwinds over a game of table tennis with his coach’s son. Pragg has also taken up swimming to stay fit. It may not seem like it, but chess can be physically demanding.

Praggnanandhaa’s is the kind of dedication that has been acknowledged by players such as Viswanathan Anand, the top-ranked Indian in chess for nearly two decades. “What impresses me about Praggnanandhaa is that he’s not just a strong player but mixes imaginative middlegame play with patient endgame skills," he told ESPN.

Pragg is a reserved boy with the shy smile and very few words. He, however, transforms into a ruthless opponent across the chessboard, with complex moves and strategic aggression flowing through his brain.

THE second half of 2019 has been a resounding success for Pragg. The 14-year-old added one more title to his kitty, winning the London Chess Classic FIDE Open in London on Friday. There was a two-way tie for the top spot between the Indian and Anton Smirnov (both 7.5/9) but Praggnanandhaa sealed the crown because of his better tie-break. This victory helped the youngster join the 2600-club. As a matter of fact, it was his third title of the year following his title triumphs in the Xtracon Open and World U-18 Chess Championship.

Now with the Olympiad success, Pragg is making greater strides in the chess world, which makes him one of the best prospects for the future. His coach points out, "Unlike others, Praggnandhaa doesn't let a defeat to break himself. He gets a bit disappointed but he is back fresh on the next day. I want him to carry on this form for the coming days and wish him all the luck."