Manika Batra, table tennis player who won the Breakthrough Star award from the International Table Tennis Federation, after what was a phenomenal year on the court.

When viewed from a global perspective, the Indians make for the easiest opponents across all fields that require a display of physical strength. Up against the mighty Cubans or the Chinese athletes, the levels of stamina that the Indian players possess have long hindered their progress in the world stage and at the Olympics. The natural built along with the better infrastructure present worldwide have threatened the country's progress in racquet sports in particular with India being unable to produce world-beaters in table tennis, squash and tennis consistently in the current era. While the likes of Leander Paes, Mahesh Bhupathi, and Sania Mirza have graced the field in the doubles arena, the inability to produce a tennis singles star in the age of rocket-high fitness standards has not been surprising.

"Players from Europe and USA are better-equipped to deal with fitness, as physical training is part of their life. They indulge in running, trekking, swimming, cycling and so on from an early age", were the words of noted trainer Ramji Srinivasan, who trains players like Narain Karthikeyan and Sharath Kamal in India. Hence, with an outdoor lifestyle not a regular phenomena in Indian homes, the citizens, in general, lack good footwork, hand-eye coordination, balance and stability, which ensures that the sportsmen from the nation have to work doubly hard to compete with the international stars.

While players like Dipika Pallikal, Saina Nehwal, PV Sindhu, who have been on the grind for long, have kept pace with the changing trends in fitness, it is the younger and the upcoming stars who are on the back foot. With racquet sports not being easy on the wallet, the hiring of a personal trainer could elevate expenses even more and though the enthusiasts are equipped with good technique, the sub-standard attention to physiology is the sole criteria that differentiates them from glory and failure.

Also Read: "The next generation of paddlers are promising - Manika Batra"

Massimo Constantini, India's high-performance coach for the 2010 Commonwealth Games constantly reflected on this during his stint. "So far we have made a lot of progress on the technical aspect, but the players think that only a strong technique will help them win. The paddlers in India hardly concentrate on issues related to fitness. It is high time the players understand that if they don't take it seriously, they will be outclassed regularly, which would be a shame after putting so much effort." 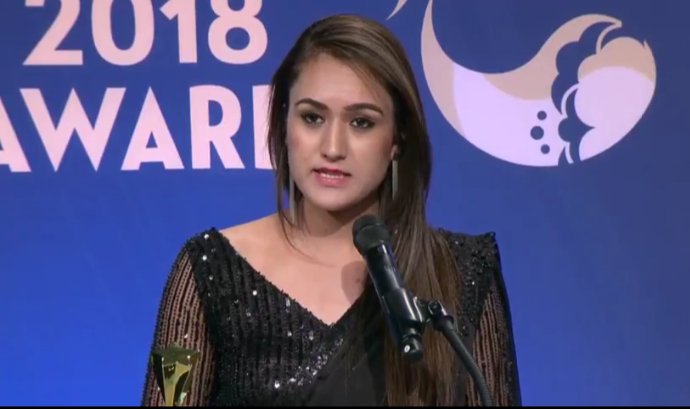 "One of the best years of my sporting career," said Manika Batra after winning 'Breakthrough Star of the Year' award

Paying heed to his warning is Manika Batra, the 23-year-old table tennis player who won the Breakthrough Star award from the International Table Tennis Federation, after what was a phenomenal year on the court.

The Delhi player led the Indian women's team to the gold medal against defending champions Singapore at the Commonwealth Games this year, defeating world number 4 Feng Tianwei in India's 3-1 win. She bagged an individual table tennis gold along with a silver in the women's double along with a bronze to cap off a memorable outing.

Wins against world number 18 Sofia Polcanova in the Ultimate Table Tennis and a bronze in the Jakarta Asian Games has pushed the youngster to the 58th spot in the world rankings, making her the top female table tennis player in India.

This rise, Batra admits, has been brought about by a staunch fitness regime, which has helped her adapt to the approaches that different players adapt. As the Europeans take the ball early, there is a need to react quicker. The Chinese on the other hand play closer to the table, which means that a paddler has to have quick reflexes and play the ball on the bounce instead of playing on top of the bounce.

Also Read: How Manika Batra turned out to be a giant-killer

However, her height, which often works to her advantage, at times creates fitness issues as well - she has to bend more, which tends to create extra pressure on her back and upper legs. This has often caused lower back spasms and for the last two years, Batra has been keen to stay on top of her fitness game. Since the 2016 Rio Olympics, the table tennis player repeatedly follows a set of 10 drills that improve reaction time and devotes more time to fitness. Manika Batra named badminton superstars Saina Nehwal and PV Sindhu as her inspiration for the role they played in the growth of badminton in India.

"I would need to work more on my fitness as the sport is very fast and it is required to beat the top players. I need to be little more fitter and need to be faster than what I am right now", the player, who looked to improve herself right from the zonal days, when she would have to play four to five matches in a day had stated after her CWG outing. Within a span of just seven months, one can see the desired effects, with the game time extending as her rallies are getting longer. The injuries and the slight niggles have reduced as well and as Batra nonchalantly accepted Prime Minister Narendra Modi's fitness challenge earlier this year, the energetic spring in the step that has engulfed the youngest sporting star could not be missed.

With Sindhu, Dipika Pallikal and now Batra possessing an extensive fitness regime - something that was lacking among the top Indian athletes even at the start of the decade - the future of racquet sports in India does look promising and it is up to the fresher legs to take a leaf out of these champions' book and reinvent their game accordingly.
fitness level Indian table tennis Manika Batra Table Tennis
Latest Videos
Next Story
Similar Posts
X
X