Basketball and India mostly share a surrogate connection. The majority of basketball fans in the country adjust their clocks to follow their favourite teams in the far west, NBA, with religious fervour. However, hardly anyone casts even a mistaken glance at India’s progress or the lack of it from time to time. The 2019 FIBA Women’s Asia Cup is not spared either.

An official international tournament taking place at the Kanteerava Stadium in Bengaluru is left to occupy an inconspicuous space in the sports section. As I made my way literally through the infamous Bengaluru traffic and inclement weather, my mind skipped back a couple of years.

“Five… four… three… two” and bucket! With the scores tied at 73-all in the final few seconds of the 2017 Women’s Asia Cup Division B finals against Kazakhstan, India’s Shireen Limaye pulled off a buzzer-beating game-winner. The same Kanteerava stadium rang with joy as the home side not only won the Division B title but also secured promotion to Division A.

Coming back to 2019, to the same arena, there were familiar faces, limited mostly to the players’ relatives. However, the opponent was neither familiar nor easy. Japan is the current World No.10 and defending champions. The 2020 Olympics hosts are back at the Kanteerava Stadium aiming to become the third team ever to complete the four-peat, after winning the title in 2013, 2015, and 2017.

I was not expecting India to stop the Japanese juggernaut, instead, all I wanted to see was a good fight from the home team, on their home turf. However, it is surprising how minimal expectations can turn disappointing too.

After the warm-ups and team announcements were done, it was clear where the louder noise was coming from, on and off the court. Japan went ahead right from the tip-off with a brilliant 3-pointer. It took 3 minutes for India to open their account, thanks to Hemalatha, and the home crowd finally got fired up.

India was clearly missing a rebounder and Japan led 28-7 after the first quarter. The game just kept going south in the remaining quarters with Shireen the only bright spot and the match ended in a 103-27 loss for the home side. The defending champions were stronger, fitter, quicker and better in every department.

On the other hand, India converted just 10 of their 56 field goal attempts and just one of their 12 3-pointer attempts, which explains a part of the story. However, the bigger lump in my throat was caused by a bigger problem.

Right from the starting minute until the players boarded their return bus, all I could see as a fan was, an utter lack of confidence. That Japan would outclass India, was expected, however, the home side’s approach to the game, left a lot to be desired, to put it politely.

The Indian team roster was definitely missing the experienced heads of Anitha Pauldurai and Raspreet Sindhu, key players from the 2017 team. Further, an unexplainable lack of participation in major tournaments in recent times reared its ugly head throughout the match, as players struggled to manage game situations.

The gulf in class between India and Japan extended to the fans as well. The fact that Japanese fans outnumbered their Indian counterparts was a bad sign in itself. The Indian support did make their presence felt every once in a while but those were far and few in between.

However, it is a single incident which left me delighted and dejected in equal measure. As the rains refused to relent, the Japanese fans stuck out their umbrellas to assist the players until their bus, it was quite a scene. I instantly wished I had an umbrella to try and do the same for our players but then it was missing just like a lot of other things.

Making my way back home in the increasing downpour, all sorts of questions were pounding my head.

While the questions remain, all I am hoping for are a few answers and much better fight in the next two games.

Haripriya
A passionate follower of Indian Sport. Being paid to stay active on Twitter. 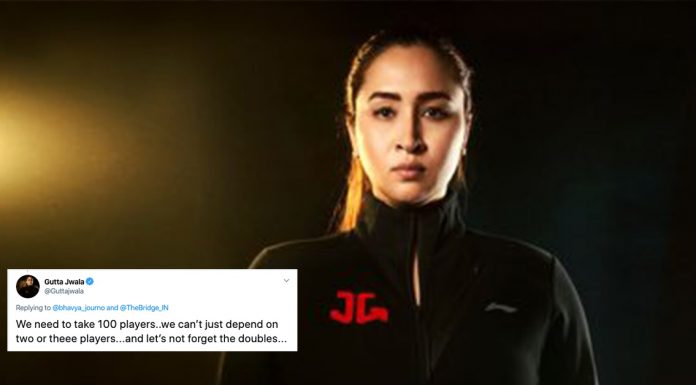 Md Imtiaz - January 23, 2020
India’s most successful women’s doubles shuttler Jwala Gutta is on a new mission. The 36-year-old Jwala on who lately inaugurated Jwala Gutta Academy of Excellence came in a Twitter Question and Answer #AskJwala session with The Bridge, where she spoke about a...
Read more