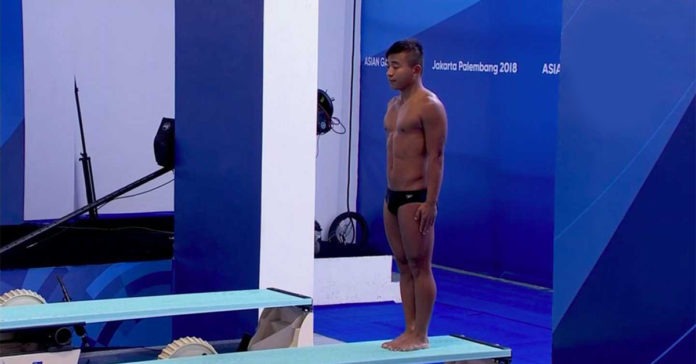 Diver Ramananda Sharma clinched the first gold medal for India at the ongoing 10th Asian Age Group Championships held in Bengaluru. The 21-year-old Ramananda secured 300.80 points in the 1-metre springboard men’s event for the open category to walk away with the gold medal, while his compatriot Siddharth Pradeshi won bronze scoring an overall 272.25 points. The silver medal was claimed by Iran’s Valipour Mojtaba.

Besides the gold medal by Ramananda, India added three silver medals to its name in diving to further the medal tally of 52 medals won overall. Ramananda had won one gold and one silver in the previous edition of Asian Age Group Championships held in Uzbekistan, while Pradeshi bagged three gold medals.

Speaking about an upsurge in India’s diving performance, Pradeshi said, “For the first time in 34 years, India had participated at the Asian Games in Jakarta last year. There, Ramananda and I finished sixth in 3-metre springboard synchronised diving and I also finished sixth in 1-metre springboard individual event. Working under coach Salazar has helped us a lot. His technique and work ethics are on par with other nations who are dominant in diving. Our performance at the 2018 Asian Games has given us a lot of confidence to do better in international meets. We are very confident if we continue like this, we stand a chance of making the qualification for the 2020 Tokyo Olympics.”

In the 3-metre synchronised diving for men (group A and B combined), Satish Kumar Parjapati and N Willson Singh bagged a silver medal with a total score of 217.26 ahead of Thailand’s Thitipoom Maskin and Conrad Yoseph who scored 216.75. Yang Ling and Zhu Yongxin of China won gold in this event.

Palak Sharma of India won silver in 1-metre springboard for girls group C with a total of 186.70 points while Sudirman Nur Nufidah of Indonesia bagged gold and Wai Ki-Chan of Hong Kong took home a bronze medal. In the same event for group C boys, Invider Sairem from India won silver with total points of 269.45 while Sugimoto Ruon of Japan won gold (274.65 points) and Jamshidi Mohammad of Iran (232.70) won bronze.