Good wishes, prayers and plenty of hard work. As athletes converge in on Japan from July for the Olympics, they will not only be relying on their strengths but will also be hoping for vociferous chants from their countrymen as they near the finish line. As much as sports revolves around the physical and mental conditioning of a player, it also depends on the backing received, the encouraging words uttered before a star embarks on his biggest battle.

And to ensure that the Indian contingent for the upcoming Tokyo 2020 Games have no lack of support, three cyclists from Cochin, Kerala are traversing the length and breadth of South Asia, collecting warm wishes, signatures and chants, which they hope to convey personally to the athletes before the Olympics gets underway.

Haseeb Ahsan, Dona Jacob and Clifin Francis started their cycling tour on December 15 last year from their home city and aim to reach Tokyo on July 20, four days before the quadrennial event is to get underway. Traversing around 10,000 kms and eight countries over 240 days might have its perils, but for the adventure enthusiasts, the thought of cheering for the nation at the grandest stage triumphed over the risks that such a journey would entail.

“The major objective for us to watch as many events at the Olympics wherever possible and cheer for the Indian team. Another thing that we are doing throughout the journey is to collect good wishes for them,” states Ahsan in an exclusive chat with The Bridge. Having quit his job at Amazon in Bengaluru last month, Ahsan agreed to take part in his first cycling tour after meeting his college mate Francis in Moscow in 2018. Then, Ahsan had taken a flight to Russia for the FIFA World Cup, while Francis had cycled to the country from Dubai.

“I and Ahsan spent one week in Saint Petersburg in 2018. I had already planned to cycle to the Olympics, and he was interested in tag along as well. Dona (another college mate) was also interested and we got going,” adds Francis, who had cycled more than 5000 km two years ago through Iran, Azerbaijan and Russia to reach the FIFA World Cup. He has already hitch-hiked across Myanmar, Thailand, Cambodia, Vietnam and Laos in the past before, and his experience of the rocky terrain will come in handy as their group “Snails of Wheels” cross the Indian borders in the following weeks.

Dona, whose only experience of long-distance cycling in the past was her 28-day and 1,000 km tour of Cuba, spoke at lengths about the safety of women travellers in India and broke the myth about the unsafe environment that females have to encounter if they take on such excursions. “I have not faced anything so far, and people have really been kind. People in Odisha (where they are currently camped) have been asking us regularly if we have had food. The only issue that sometimes crops up is that since I am travelling with two male cyclists when we need to rent a room in a hotel, they find it suspicious at times. But otherwise, while I’m on the road, it’s all fine.”

She also urged more women travellers to explore their country and spoke about how she aims to generate awareness on menstrual health through her tour. “In India women are scared to go out thinking about their safety. But they should not be as it’s pretty safe for women out there. They should actually explore the world more and travel more.”

Along with spreading the message of the need for menstrual cups, the ‘Snails on Wheels” are also aiming to raise money through a photo exhibition of the pictures that will be clicked by the trio on their route. The funds will be utilized in buying bicycles for the girls in rural India so they can travel to schools, and Dona is also in talks with NGOs to spread the message of gender equality and empowerment among the youngsters. The approximate cost of their journey is INR 20 lakhs, including visa charges, and Francis was quick to add that no funds that will be raised by them on their tour will be used for their personal expenses.

When quizzed about the challenges of such a rigorous trip, Ahsan narrated that the pros outweigh the cons. “We are travelling at our own pace; meeting new people and interacting with locals of so many cultures. We do not keep cycling the whole day as we want to explore and gain experiences as well. At night, we usually find a good host who lends us accommodation, else we camp in churches. If a church isn’t available, only then do we look for hotel rooms.”

“The only disadvantage in India is that there is no scope for camping in public places in India. But once we cross Bangladesh, we can camp outside as well. The terrain might be tricky, but it is exciting as well.”

Imbibing personal thrill with a social cause and hoping that it culminates into India’s sporting success, the “Snails on Wheels” have paved the path for the youth who want to break away from the monotony of their mundane lives whilst giving them major #Wanderlust goals.

Vinesh settles for Bronze while Sakshi claims silver yet again

The Indian women's cricket team registered a convincing win over the hosts Australia in the series opener in Sydney on Friday. The win came...
Read more
Football 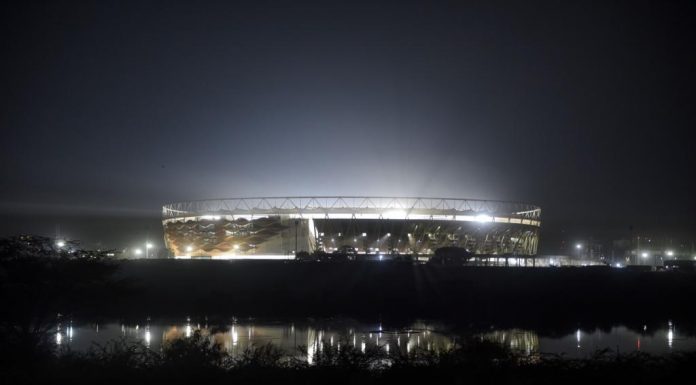 Sarah Waris - February 21, 2020
At least 45 families that live in and around the renewed Motera Stadium in Ahmedabad have been asked to vacate their houses ahead of Narendra Modi’s visit to the area with US President Donald Trump.
Read more

Vinesh settles for Bronze while Sakshi claims silver yet again