A blockbuster crew of Somdev Devvarman, Mahesh Bhupathi, Sumit Nagal & his team fielded questions from the media to get insights into Sumit Nagal’s typical day in pre-season training. 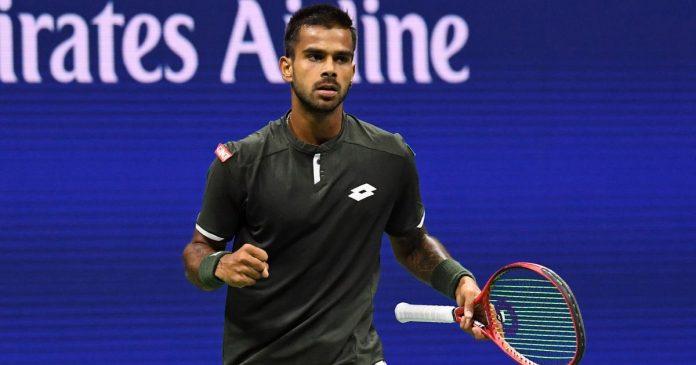 IIT-Madras campus was home to none other than Sumit Nagal and his team as they sweated it out in a high-intensity pre-season camp from December 14-27. Playing hosts to Sumit and his team of coach Sascha Nensel, fitness trainer Milos Galecic and physio Yash Pandey, the courts and the track fields at the institute were witnesses to a rigorous bout of off-season training for two weeks.

IIT-Aspire High-Performance Tennis, mentored by Somdev Devvarman, aims to provide a good training base for the players and also create the next generation of Indian players. The program is run by Aspire Foundation and is stationed in the scenic campus of IIT-Madras. The program conducted “A celebration of Indian Tennis”, on the account of which, an interactive media session was followed by an exhibition match.

A blockbuster crew of Somdev Devvarman, Mahesh Bhupathi, Sumit Nagal & his team fielded questions from the media wherein we get insights into Sumit Nagal’s typical day in pre-season training, inputs from his coach Sascha Nensel and trainer Milos Galecic, Project 61 and much more. A few excerpts from the session – About Sumit Nagal’s Preseason Camp at IIT

Somdev: I had a conversation with Sumit’s coaches. One of Sumit’s coaches happens to be Milos Galecic, who was my fitness coach for my entire career. This was one of the ways we stayed in touch. So after a few discussions, we agreed that Chennai would be a really good place to host a preseason camp. The second we discussed all of this, everyone was really on board. Our goal was to bring a really good high-intensity training camp to India with the best players, give them exactly what they need in order to take the next step. I think that’s exactly what we’re doing. What’s been great about my time over the last year or so with Aspire has been the fact that everybody in India has had access to world-class coaching.

About Sumit Nagal’s coaches and learning from the best –

Somdev: We’ve done a few camps in the past. I consider myself very lucky as well, because I’m a young coach and I get to learn from a coach such as Sascha and Milos. Sascha has been on tour for 15-20 years and he’s worked with the likes of Nicolas Kiefer, Julia Goerges, [Dusan]Lajovic and so many other players. For me to be under him and observe – there is so much that goes into coaching the communication with the player in order to get the best out of him. Not just for me, but for everyone it’s an invaluable experience, especially for the kids who’ve been a part of the camp, to see this to be around this kind of energy, to have a guy like Milos come in.

One of the biggest problems also that we have in India is fitness. We also noticed that in India, the feel of strength and conditioning was really lacking. We noticed all of these as opportunities and spaces where we need to improve. I’m just very happy to say I’m thankful to Sumit and his team, for coming over here because the sky’s the limit for this guy. He’s 22 years old. Everybody knows him right now for taking a set off Roger Federer and [he can] again do that if he continues to work as he’s been doing at least over this past one year, you’re going to remember him for a lot more than that.

Sumit’s got a pretty cool chain that says Project 61. And I think, one of those things is because we want him to beat my highest rank, 62, which I really do believe he can and as a person who’s been involved in Indian Tennis and cares about it and its future growth, I think all of us can agree that we would like to see a lot more players in the top 100. And that’s exactly what we’re trying to accomplish over there.

Mahesh: My journey with Sumit started when he was 10. As Somdev said, we all are excited that he took a set off Roger Federer and personally, after the work we’ve done for the last 10 years, we’re going to have to remember him for a lot better than that. He’s hard-working, he’s got a good head on his shoulders and most importantly, for the last year, he’s put the right people around him. We are all keeping our fingers crossed.

On a question about tennis being only for rich people

Sumit: I don’t agree with that. I come from a middle-class family. My dad is a teacher. My first 2-3 years was just a lot of tennis hours. I didn’t know anything about it. My journey started when I met him[Mahesh] in a camp. There are many players you can name, there are top-100 players who have done well,[who] come from a middle-class family. Talking about not having resources do matter, but I don’t think it’s the biggest issue.

Sumit: I think that it is pretty important. I have a mental coach and am in contact with them. I think it’s one of the biggest impact on any sport. If you are mentally fit, you can push through your limits, Because at the end, your mind knows everything.

Milos: Sumit is 22 years and has a long way to go for sure. We have made strides this year, but he is not a finished product yet. There is no magic formula, it’s consistent work. It’s putting in work every single day, recovering with his physio(Yash Pandey), coming back the next day, being able to handle the intensity of the on and off court work. That’s unfortunately what is required to be successful on the elite professional level. I think the most important thing to realise here is that while it is important to have a team and support structure around you. By the end of the day, he’s the guy who’s put in the work, who has struggled and pushed through some tough moments and he’s the one who’s done the work, so we enjoy success through him, but it is his success and he’s the most responsible for it.

A Sample Day in the Pre-season training camp

Fortunately for Sascha and me, our day ends at 6 [p.m.]. Unfortunately for Sumit and Yash [Pandey], their day continues as he has to do his recovery stuff, stretching, massages for injury prevention. So I think dinner is probably around 8:30 or 9[p.m.]. I like to think he’s in bed by 9:30 or 10 [p.m.] but he will confirm that for you(laughs). But this is what a day looks like. That’s what the last two and a half weeks have been like and he still has another week and a half to do on this.

Changes made to Sumit’s game

Sascha: We have worked a lot on his backhand game to go faster and deeper. There is still a lot of room for him to improve. We have to see his size and we also have to see his body. He is gifted in his forehand side. So everything works around that. He’s 22 years old and the good thing for all of us and for him is [he is] not over 60% of his capabilities right now. It’s good for him, it’s good for us. It’s also a big mission for us.

Diet of a player

Milos: I will tell what he should eat and maybe Sumit will say which of the boxes he ticks on that. Obviously it’s a period where he goes through so much physical stress, it’s important for him to refuel his body – to prepare his body for the stress as well. We stretched the idea of breakfast. It’s an extremely important meal for us. We’ve talked about having sufficient complex carbohydrates in his diet. We talked about having sufficient protein, staying away from sugars as much as possible and hydrating prior to practices, hydrating all the day and finally also ending the day with a really good meal.

Sleep is the best recovery for the human body. It’s important to head to bed with sufficient water so that the body can digest all this, recover, and be ready for the next day. I think it’s okay for our athletes to stray from this path, from time to time to enjoy and have some guilty pleasures. I think a well-balanced diet is important, but I think there is some room for other relaxation. Reward yourself up every day, and I think Sumit does a fairly good job. In this year I have worked with him, he has really upped his professionalism & dedication. He’s getting some rewards for those investments. I hope he continues to make those sacrifices and I hope that it keeps coming for him.

Rock climbing is an activity where people climb rock formations or artificial rock walls in any direction. On some occasions, climbers use equipment like...
Read more
Karnataka Press Trust of India - Modified date: May 23, 2020
Indian shuttlers on Friday questioned the rationale behind scheduling 22 events in just five months in a revised BWF calendar, saying the “stupid” planning will increase the injury risk. The Badminton World Federation (BWF) unveiled a revised international calendar to salvage the remainder of...
Read more