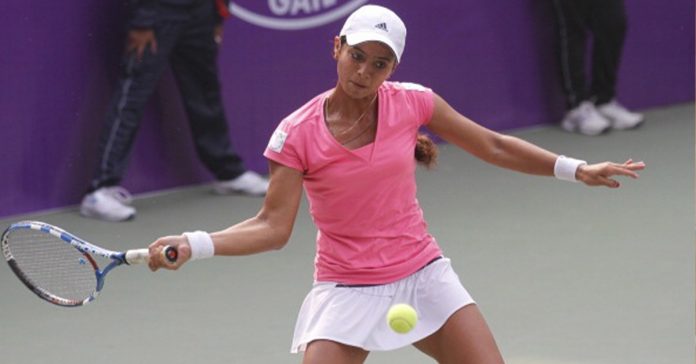 Competing in the world of tennis is no ordinary ride in the park. Both on and off the court tennis players face the heat in ways that might affect their overall lifestyle. Who better than a seasoned tennis player can walk us through that turmoil? The Nation’s No.1 female tennis player in the singles category, Ankita Raina, explains us the dark clouds that hover over professional tennis. In an interview with The Bridge, she gives us an insight about her consistent peak in the National rankings, her practice regime, the ongoing Australian Open and the negativity that is prevalent in the lower tiers of the sport.

You have been the Nation’s No.1 singles player for over 6 years now. What do you think is that extra edge that you possess that helps you stay upbeat and stay adhered to the numero uno spot?

I feel my coach is the best judge to answer this one. But still, I think it would be perseverance and hard work, the drive to keep getting better each day, at the same time overcoming your limits.

For someone who has stayed active on the pro circuit for such a long time, which are the main aspects that set it apart from the highest-tier of events?

According to me, the main aspects are pressure handling and mental capabilities.

How different is it to be televised, win matches, have a separate fan base, compared to playing at the WTA 125k and ITF events?

For me, every match and tournaments are the same. During a match, my focus has to be on the ball and the game so the rest doesn’t matter.

There are various players out there who are trying to make their voices heard in order to improve the financial situation for players on the pro circuit. In what all ways do you support them?

In my opinion, every country or nearby regions should have a minimum number of tournaments that will reduce the cost of travelling for most of the players. But as the requirement of appropriate level tournaments for every country would be different this is difficult to achieve. Mote prize money at a lower level, maybe a draw of 16 will help to reduce the number of days which will reduce the cost of staying. When you think in the direction that players should be benefitted only then one will come up with such changes but until that’s not done the scenarios will be the same. Also, I fell that these leagues like TPL (Tennis Premier League) or PTL (Pro Tennis League) in India are also helpful, players get a chance to earn some decent money while their travel and stay are taken care of, so such leagues need to continue.

Recently, Thai-Son Kwiatowski, ranked 267 on the ATP circuit stepped forward on Twitter and revealed that he was threatened by bettors when he lost one of his matches in Caledonia. The TIU has already said that betting and fixing are more prevalent at these tiers of the game. For someone like you who has been active on the pro circuit for a long time, have you ever been threatened in such fashion?

Yes, this is very common. Most of the players receive such messages after winning or losing their matches. It started since the live scoring came into the picture and I’ve received such messages as well. The message is abusive or threatening to you or even your family at times. Initially it used to be disturbing but later I realised that it’s not something one can control so why let it affect because we play matches every single week.

Are you aware of any of your peers who have faced such a situation?

Yes, one of the players I know who has been ranked around 80-120 once got a message saying “ I hope your mother dies of cancer” etc. a and that time her mother was suffering from cancer and a few years later she did pass away. And when she had got this message she did tweet about it.

Something about your coaching regime… How does overseas training help compared to the facilities here in India?

The only difference I feel is you get more players to practice outside India but coaching as such is the same. At my level, I play 30 weeks of tournaments, so coaching and training during tournaments are more important.

You recently played your singles qualifying draw match at the Australian Open. Do you feel that the ongoing Australian Bushfires affected your performance?

I definitely didn’t feel normal physically, I’m used to playing matches every week back to back but in my first qualifying round I felt very uneasy. In the morning when I got to the venue, I could see the sky wasn’t clear and I remember blue skies from last year in Melbourne so this was smoke probably. From the beginning of my match, I was feeling tired and uneasy in my chest, which is strange when it’s just been 2-3 games since you started. I took the medical timeout in the second set, I think she was 3-1 and I threw up so I told the umpire I need the doctor. It was 3-2 when the Physio came on court, I told them how I was feeling (burn in the chest, the stomach was paining and just feeling drained out) that wasn’t usual for one and a half set, no way! It was just unlucky it happened on such an important day.

What are your goals for the 2020 season?

This year my goal is to play the main draw of grand slams and take my ranking to top 100.

Which aspect of Indian tennis do you feel needs to improve in order to see a further enhancement in the singles category?

The more appropriate level of tournaments conducted in India would definitely help, if players get this opportunity the financial burden is also reduced which comes with travelling expenses and competing in your own country is an added advantage.

Favourite tournament is Wimbledon because I like playing on grass. And otherwise, it’s the WTA Mumbai Open.

Dr. Balraj Shukla
Dr Balraj Shukla is a Dentist and a Freelance Sports Writer. He focuses mainly on the sport of lawn tennis, having a keen eye for the history of the game, statistical analysis and the remarkable tales surrounding the sport. Through words and paragraphs, he wishes to uplift the scenario of Indian tennis in the singles category.

Umaima Saeed - February 27, 2020
Chandni now regularly competes in U12 and U14 categories. In her very first AITA Tournament three years ago, she reached the quarterfinal.
Read more