Has the right kind of ingredients in his game: Tennis veterans share thoughts on Prajnesh Gunneswaran

Indian Men’s Tennis has had its best year in several years in 2018. 3 of our players finished in the top-130 and Prajnesh Gunneswaran moved up from a rank of #263 to #104 in what capped a phenomenal year for him.

Living up to the great history of Tennis from the tennis capital of India – Tamil Nadu, Prajnesh won two $150K challengers, reached 2 finals, was instrumental in India’s win over China in the Davis Cup playoffs and also recorded his first top-25 win, with a victory over Denis Shapovalov in Stuttgart. 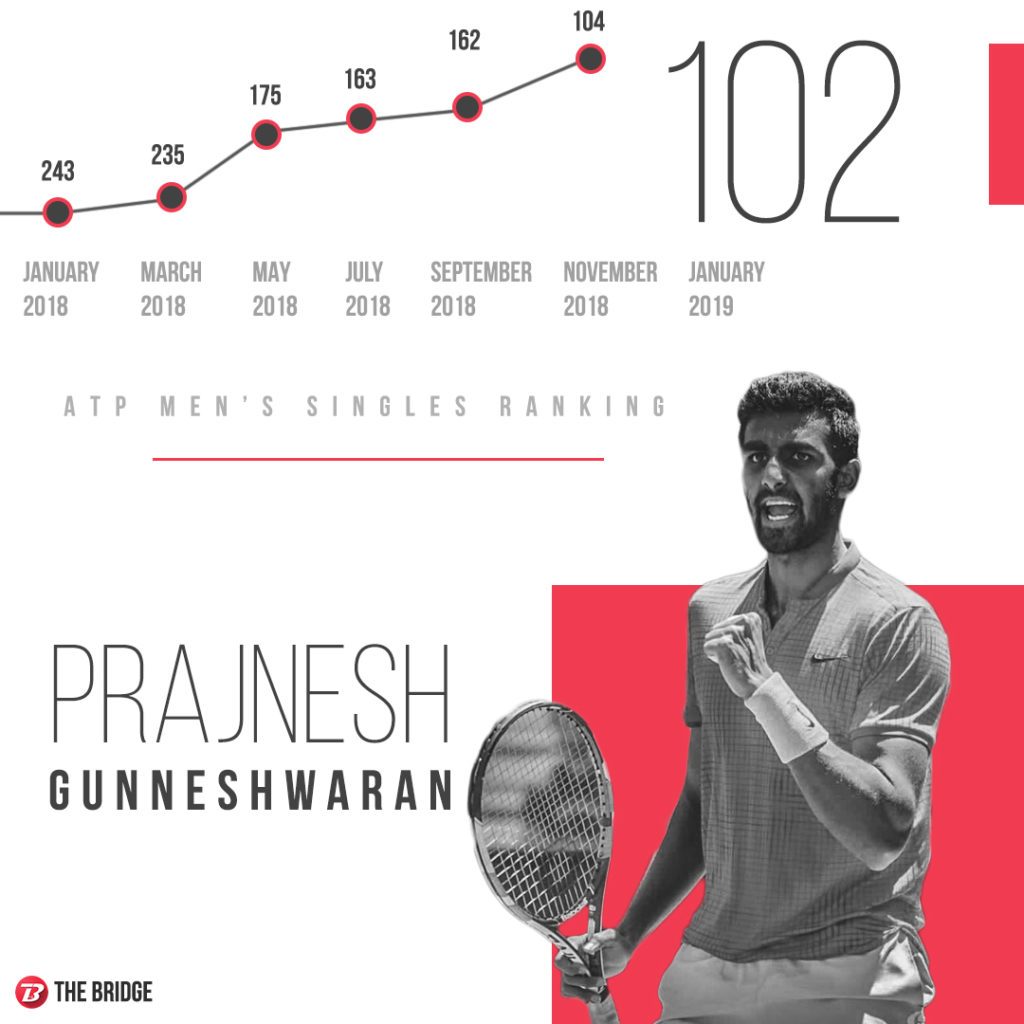 Indian Tennis Daily caught up with the 1987 Davis Cup Final team – incidentally the 4 of them were from Tamil Nadu itself, to get their thoughts on Prajnesh Gunneswaran and the state of Tennis in Tamil Nadu.

This is the 3rd article in the series of 9 articles. We are thankful to Anand Amritraj, Vijay Amritraj, Ramesh Krishnan and Vasudevan Srinivasan for encouraging our work and being available to speak to us.

When was the first time that Prajnesh Gunneswaran caught your attention? Your first impressions of Prajnesh back then.

I have known about Prajnesh for a very long time. He is the same age as my daughter and niece and they have all played in a lot of tournaments together. It is nice to see him come into his own in recent times.

I have seen him playing for a couple of years now. He is a big boy, serves well and strikes the ball with good aggression, especially on the forehand. I thought he had good potential but the question is 2 parts:

I don’t know the young lad well enough to know the answers to the above questions but I have seen and met him a few times. Great lad. He has the right kind of ingredients in his game in terms of potential to go places. The commitment, the fitness ethics, the mental aspects – can all of these come together to fulfil his real potential is what we need to wait and watch.

I met Prajnesh for the first time during the Davis Cup match against South Korea in Chandigarh. He was a reserve member in the team. I got to know him better during the course of the week. He was a quiet and hardworking young man. As he was the reserve member, he was mostly helping out the team with the practice sessions.

It was quite obvious that he had a big serve and forehand but his game didn’t suit the grass courts as much. Then I saw him again as part of the Davis Cup team in Pune in 2017 – which was my last assignment as Captain. It did seem that he had a bright future with his game though it was important that he needed to work on closing out the points.

I have started following him a bit more in the last year or two. I have been at the Chennai Open a few times and had watched Vishnu Vardhan (against Ivan Dodig), Sriram Balaji and couple of others. Prajnesh jumped into the radar over the last couple of years. He has been there for a long time of course and the talent has obviously been there.

Thoughts on his journey in 2018

He has been playing very well for the last 6 months. Results have been consistent and that reflects on his rise in ranking. The match that stands out was when Mahesh Bhupathi put him in for the deciding singles match in the Davis Cup tie against China. That was a very crucial win.

He has gained in confidence. His results are a lot more consistent, which is the name of the game. He also has a powerful forehand.

You never get to win matches or rise higher unless you are working hard enough. I am sure he worked hard to get to this state. He is India’s No.1 now and from the state of Tamil Nadu – so we are all very proud of him. As I am the President of TNTA now, I am even more thrilled at this.

This is just the start of it. He needs to see it as the stepping stone to where he needs to get to.

The win against the Chinese kid Yibing Wu in the decider would have been a massive confidence booster. His continued success from there on in Anning, French Open, Asian Games, Chinese and the Indian challengers have propelled him to the #104 rank. This is a huge move as it gets him knocking on the Grand Slam main draw door.

We Indians tend to mature late and Prajnesh being a leftie, has that slight bit of advantage too as we do not see too many of them on the tour.

The key to this rise has been his consistency in the challengers. Now is the time to progress towards the ATP 250 Qualifying / Main Draw and slowly leave behind the challengers. However, becoming the Indian No.1 is a huge achievement indeed.

The Davis Cup win was very good and gave him the fillip needed and have followed more closely from then on. He has had a long time away due to injury but it shows his tenacity to be able to make a comeback like that.

Ramesh Krishnan & Bjorn Borg as the winners of the ATP Stuttgart in 1982 & 1981 respectively, donning the Arena enclosure before Prajnesh’s match against Denis Shapovalov

Any aspect that you feel he should work on, to move up to the next level.

Once you have reached this stage, you are not going to make wholesale changes. It is a question of fine tuning further. Physical fitness will also be a key factor.

There is no substitute for commitment, hard work and discipline. Then it’s a question of taking pride in moving higher up the ladder and feeling confident about playing in the higher grade events. Then eventually get into to the Master’s events – that should be his drive. Of course a couple of wins here and there would give him that confidence to do even better in the bigger tournaments.

Prajnesh already has a big game with his serve and the groundies. To move to the next stage, you need to move better – this is where most of the Indian boys struggle against the westerners. He also needs to be strong so that when he has somebody down, he should be able to put them away. Third – he should become better at finishing off the points. He gains the advantage through his groundstrokes, needs to get more confident at the net and work towards cashing in on the advantage.

Thoughts on the state of Tennis in Tamil Nadu right now

We have a good group of players (Reference to the likes of Ram, Vijay, Balaji, Jeevan, Mukund, Manish, Abhinav and others). Hopefully, they can push each other to greater heights.

Vis-a-vis my new role, we are putting in a variety of plans for 2019 and beyond. It’s important to promote Tennis at the grass-roots i.e., High school and colleges while at the same time, see how best we can get the top players to become even better. We will also focus on the juniors to provide them with opportunities to make themselves be in a state to play the Junior Grand Slams.

Vis-a-vis the current pool of players: The talent is there. The important part is climbing the ladder. We always seem to be stuck in the 2nd or the 3rd step of the ladder. We have to remember that unless we take the jump to the top-50, it would not be possible to make it to the world group in the Davis Cup or the Fed Cup.

Tamil Nadu has a great history from the era of Ramanathan Krishnan to us brothers + Ramesh and now Prajnesh, Ram, Jeevan, Balaji and others. No other state compares to the elite stage talent that has come up from Tamil Nadu.

In the end of December, we had the TNTA event called the ‘Celebration of Tennis’ covering this rich history with all the above players being present.

Vijay Amritraj is the new TNTA President, so it is indeed exciting news. I have been in touch with a few of my friends who are still part of tennis in Tamil Nadu but I have not been as closely involved myself. I am in touch with Mr Balachandran of course, who is involved with quite a few of the boys from there.

One of the positives among the lockdown is the team is in this journey together. It's been over two months that the Indian men's...
Read more
130,965FansLike
12,136FollowersFollow
7,153FollowersFollow