Leander Paes and Jelena Ostapenko defeated the Australian pair of Marc Polmans and Storm Sanders 6-7 6-3 10-6 in the first round of the mixed doubles event of Australian Open.

Leander Paes and Jelena Ostapenko defeated the Australian pair of Marc Polmans and Storm Sanders 6-7 6-3 10-6 in the first round of the mixed doubles event of Australian Open. Piyush caught up with Leander Paes to get his thoughts on the win and on his remarkable journey so far!

You guys did absolutely well today. You guys were absolutely phenomenal. Well, was there moments that you could pick from the game that you would want to discuss?

At the beginning of the match, was just trying to feel each other out. You know, when I hadn’t played with my partner before. So to feel her out and she was fantastic, just smiling. She was happy. She was hitting shots. My God, she’s a good tennis player. Oh, groundstrokes are so powerful. A technique is so powerful. It took me a little while to get that feel in a match. Plus, also, I had not played the other opponents, you know. So, got a feel of them. But I felt at the beginning of the first set there was a chance we could go up. In the tiebreak, the other girl played unbelievably well. At 4-4 in the tiebreak, my partner served to a backhand and bang, straight down the lane past me for a winner. She was hitting some really good shots in the first set tiebreak and I was playing a little too careful this time to get into the game.

And then after we lost the first set, I sat back and I said, “Hey, you know, this might be my last Australian Open match. Go out there and swing away. Be as aggressive as you normally are. Have fun. Enjoy yourself. Play your game. And then we went 1-0, 2-0, 3-0. And then I got rhythm. And then even in the match tiebreak, I think we were up for 8 4. And so had a good rhythm.

This is your last tour. You call it “OneLastRoar”. How does it feel after so many years?

Bittersweet. Just now, while I’m talking to you, I have come out of the zone of being in a match. Just five, three minutes ago. It could have been my last major. I played here first in 1989. All of this was different. This building was not even there. And I did the interviews on the outside. You know, I mean, you come from this court, 29, 19, 21, 22 from outside. There was a corridor, a ramp that came down. I was doing my interviews out there with the Richard Evans and all those guys, Neil Harmon’s, they were all young guys coming up and 1989 to now, that’s five decades. That’s a long time. But one day it will stop. And one day it will stop. The music will stop. But the music will continue to build champions. Music will continue when one of my players are sitting here with you. Music will continue when one of my champions will be somewhere in the world doing something wonderful. And for me, that is the next generation.

You played your first Australian Open, as you mentioned, in 1989 and it’s 31 years down the line. What are some of your fondest memories in Melbourne park?

My first match. My first Grand Slam match I ever played was court Number 21 right there in the park. And as a young boy, I was very shy. Never talked as much like this. I used to write my daily quiet, eat my dinner, peaceful, alone. I remember coming to Australia in 1990. I thought I could do well. I’d worked really hard in the first round, I drew No. 1 seed junior and everyone was like “Hey, bad luck. You know, it’s a tough draw”. No worries, French Open coming up” and I thought I can beat them.

And then I played on court 21 again and I beat them and I go to the final. And then I remember I can remember it now like it was last week. That was the first time I thought, hey, I’m not so bad on this thing. I can do something because I never, ever in my whole life I’ve never considered myself a talented technical tennis player. I’m athletic. I’ve got the brain. I got the technique. That was the first time I said, hey, maybe, maybe I can do something with this. If you had told me then that I would play for so many years, I would think that you’re joking. I never imagined I would have this beautiful life. I’m very thankful for the gifts and relationships and motivation. Some of the fans that come out to support me now. I started playing when their grandfather was there and his son grew up with me because that’s my age. Then the daughter’s grown up with me. It’s the Elina’s age, 22. Some of them are married now and the kids are there.

So it’s really it’s a nice thing to see how you’ve come to Melbourne, Australia. You go to Paris, France. You go to Miami, Palm Springs. You go to Tokyo. You go to, you know, from Ecuador. Today, one of my young fans from Mexico and from Ecuador was in the stands today and they’ve come all the way from Leon, Mexico. For an Indian boy from Calcutta, it’s not so bad.

Your partner Jelena Ostapenko, she’s half your age. She’s a former French Open champion. Any words on her?

You know it’s a treat to play with this next generation because the mentality is different.

You know, they come out there and they play big. They play strong. Her technique is phenomenal. She hits the ball big, but not anything she thinks like a champion. If every one of this young generation, they come out of there and whether they’ve won Grand Slam or not, everyone is thinking like champions. And if you look at the results on the tour, there’s not one person really dominating completely, it’s always every week there’s someone new, someone fresh coming around. And I think tennis is one of the most competitive sports because of this. Everyone is fitter, physically so strong, fitness-wise, mentally strong teams around them helping. So the margins between winning or losing is very small. Jelena, for me, I think she has much more grand slam wins in her, singles doubles mixed because she thinks like a champion. She plays like a champion. And she’s so young.

I think that in people’s lives they go through ups and downs. And she’s going through a tough time right now. And for me, I’m just lucky to be on her side to bring her some happiness even through a tough time. You know, her father passed away in the first week of January, so to show how strong she is with a character to come here and even play, for me, it’s a real special treat to be messaging with her, to talk to her, to keep her happy on the court. Because if I do that, I’ve already won. Whether I have a trophy or not, it’s already a win. So it’s a real treat to play with this next-gen.

So you made sure you clicked selfies with all your supporters today in the stand. How does it feel to have so much support here in Australia after so many years on and on and on?

Also read: Inside the legacy of Leander Paes in numbers

So I’m feeling it, too. It takes one minute to one second to make someone happy. Doesn’t take much. But it’s been phenomenal over so many years now, five decades playing here. Aussies love hard work. They love people that put their heart out. For me, I’ve had a couple of Australian coaches, I’ve had Tony Roach, who’s been my coach in Sydney when I lived with him and trained. I had Bob Carmichael and his family. So Tony and his family have been very instrumental.

The article was originally published on Indian Tennis Daily 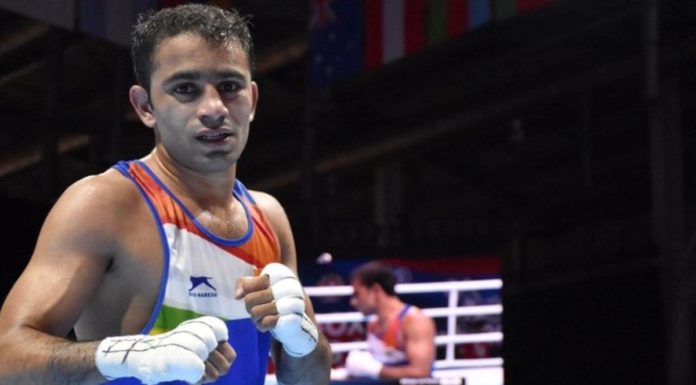 Press Trust of India - Modified date: May 22, 2020
The ministry's go ahead has come and a Standard Operating Procedure is also in place but Indian boxers are unlikely to resume camp training anytime soon as the national federation grapples with a "few logistical concerns" amid the COVID-19 pandemic. With the home ministry...
Read more