Star paddler Sathiyan Gnanasekaran became the second Indian to make it to the men’s singles quarterfinal of the Asian Table Tennis Championships. However, he failed to qualify for the semis and secure a bronze medal, as he lost to World No. 4 Lin Gaoyuan 7-11, 5-11, 11-8, 8-11 in Yogyakarta, Indonesia.

This was the second time that Lin got the better of Sathiyan on Friday. Earlier in the day, Lin, partnering with his compatriot Liang Jingkun had defeated Sathiyan and Sharath Kamal in a closely fought encounter 11-6, 10-12, 11-7, 8-11, 11-7 in men’s doubles quarterfinals.

Sathiyan had been in excellent form at the meet, having stayed unbeaten in the team event (where he beat World No. 5 Harimoto Tomokazu of Japan). However, in the quarters of men’s singles, he faced his toughest challenge in Lin.

The left-handed World No. 4 proved to be a little too much for Sathiyan, who tried his best. In the first game, he fought toe-to-toe till 6-6 but then Lin claimed four back to back points before winning it 11-7. The second game saw the Chinese paddler dominating right from the start as he took a 4-0 lead. The momentum was with Lin who went on to take the second game 11-5.

No. 30 from India tried to reverse the tables in the third game and started attacking from the word go. The start saw him taking a 5-0 lead but Lin was not about to give up so easily. Showcasing a wide range of shots and tricks, Lin levelled at 6-6. However, Sathiyan held his nerves and won the game 11-8. Lin, then, went on to produce some sublime shots and take the fourth game 11-8 and win the match. Sathiyan fought till the very end but just could not get past Lin’s defence.

Previously, in his first singles encounter of the day, the 26-year-old fought back from one game down to beat Iranian paddler Noshad Alamiyan 8-11, 11-7, 11-6, 11-5. In the first game, Noshad did not allow Sathiyan to get ahead of him at any point. However, the Indian managed to claw back into the match with some incredible shot-selection in the next three and won the match.

The win took him to the pre-quarter finals where he faced World No. 151 An Ji Song of Korea. This time, there were no hiccups as Sathiyan won the tie in straight games 11-7, 11-8, 11-6 and qualified for the quarter-finals.

Elsewhere, both Manav Vikas Thakkar and Anthony Amalraj lost their respective Round of 32 matches to Liao Cheng-Ting and Chen Chien-An in straight games.

Ayhika loses to World No. 2 in pre-quarters

While Archana Kamath, Manika Batra, Sutirtha Mukherjee and Madhurika Patkar all failed to make it past the Round of 32, it was rising star Ayhika Mukherjee who impressed the most with her gutsy performance.

The Bengal girl won her Round of 32 match with ease, brushing aside Mongolian Doljinzuu Batbayar 11-6, 11-7, 11-3. However, in the pre-quarters, she had her task cut out as she met reigning Olympic champion and World No. 2 Ding Ning.

Unfazed by the opposition’s stature, Ayhika put up quite a display but could not evade defeat. Ding took the first game 11-5 without breaking much of a sweat. But in the second game, the Indian fought tooth and nail and managed to eke out a 13-11 win. After that, Ding took charge and went on to win two games in a row at 11-4, 11-9. 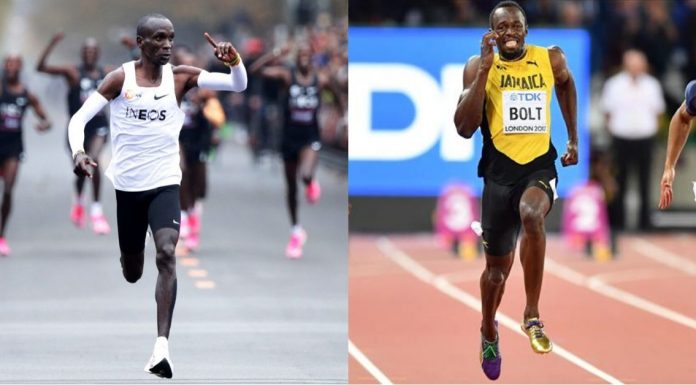 Suraj Iyer - Modified date: May 27, 2020
Eliud Kipchoge was already famous but became increasingly well known for being the poster boy who set the world record in October 2019. He finished a marathon in 1:59:40 and covered 42.1km with an average pace of 2:50 per km. Usain Bolt is popularly...
Read more