EXCLUSIVE: “I don’t know what went wrong in Rio, but I will come back stronger,” says Pistol King Jitu Rai

Three years after he crashed out of the Olympics after an indifferent showing, Jitu is unable to comprehend what led to his failing. 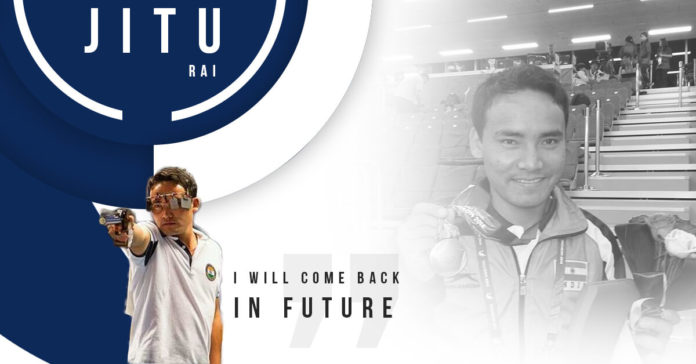 “I really can’t say what went wrong in the 2016 Rio Olympics,” says Jitu Rai, who walked into the Games three years ago with high expectations and even bigger dreams. Nicknamed the ‘Pistol King’ due to the consistency with which he churned out one gold after another in almost all the international events that he participated in, the Nepal-born captured the public imagination and was soon earmarked as a potential medalist for the last Olympics.

Sports, however, does not work that way. At the oddest of hours and at the most ill-timed occasion, the athlete’s mind goes into overdrive, fretting in situations that it had previously conquered with ease. The complexities are difficult to understand, and three years after he crashed out of the Olympics after an indifferent showing, Jitu is unable to comprehend what led to his failure.

In an exclusive chat with The Bridge, the Naik Subedar of the 11th Gorkha Regiment of the Indian Army spoke about the fickleness of shooting and how important it is for the ‘men with guns’ to have a clutter-free mind before they enter the range:

To really get a sense of how shocking Jitu’s ouster in the Olympics was, his golden run prior to the Games needs a mention. The 32-year old was a mainstay of the 10 metre Air Pistol and the 50 metre Air Pistol events for India, winning three medals in nine days at the World Cup back in 2014. He clinched silver in the 10 metre air pistol event in Munich, and followed it up with a silver and gold in the 50 metre and 10 metre air pistol events respectively in the next World Cup in Maribor. Jitu became the first-ever Indian shooter to win two medals in a single World Cup for India, and it was just the start of what was to be a fulfilling two years.

Ranked world number 1 ahead of the Commonwealth Games in 2014, Jitu took his confidence forward into the competition and created a CWG record in the qualification round of the 50 metre pistol event, where he scored 562 points. He eventually returned with a gold medal, but not before he had created another record of scoring 194.1 points in the finals. He shot well in the 2014 World Shooting Championships in Granada, winning silver, and became the first Indian to qualify for the 2016 Olympics.

A gold medal in the Asian Games followed in the 50 metre pistol event in 2014, and he won another bronze in the 2015 World Cup in Changwon in the 10 metre pistol category. Jitu carried his form into 2016 as well, where he clinched silver in the ISSF World Cup (10 metre air pistol) just days before the Olympics.

All impressive returns for someone who did not voluntarily venture into shooting but was pushed into it by his coach. “I was never interested in shooting,” he says. “I did not understand the sport much and I never chose this path. My coach in the India Army pushed me to take up shooting, and my only aim was to play the nationals. I never realized when shooting turned into a passion, and I was spending hours at the range perfecting my skills.”

The turning point for Jitu arrived when he met Vijay Kumar, the surprise silver medalist in the 25 metre rapid fire pistol of the 2012 Olympics. “Meeting him after his feat just inspired me to play in the Olympics. I started working harder to reach that stage. Yes, I slipped as well, but I never let negative thoughts affect me. Patience and staying grounded during success are traits that every sportsman should possess.”

For someone who still regards calmness and mental fortitude as his biggest strength, his unravelling at Rio, then, remains paradoxical and ironical.

Unable to manage his time well, Jitu had 15 minutes left for his last 10 shots in the 50 metre Air Pistol qualifying round – his pet event. He finished 12th in the qualification round with a score of 554, and a dismal 7 in the penultimate shot led to his Olympic dream slipping away. Though he fared much better in the 10 metre air pistol event, advancing to the finals, an indifferent start meant that he could never really recover. His once ablaze career too failed to reach the zenith thereafter, and though he did manage to win two gold medals last year (in the New Delhi World Cup and the CWG – both in the 10 metre air pistol event), he has no longer been the same force to reckon with.

A long break from shooting that has coincided with the emergence of a number of young stars like Saurabh Chaudhary and Abhishek Verma makes his task of a comeback tougher, but Jitu is not losing hope.

Earlier this year, India’s pistol coach Pavel Smirnov had stated that it pained to see Jitu, not in the thick of things. “It is painful to not see Jitu in action in the international shooting. What happened I don’t know.” Ask Jitu about Smirnov’s comments, and he says, “I am looking forward to come back to shooting soon. I know that the future of Indian shooting is really bright, with players like Saurabh and Abhishek doing the nation proud. I am training at the Mhow Infantry School, and I have even made a range at home so I can be near my family.”

Jitu, who married kickboxing Asian medalist Sushmita Rai in 2017, admits that is constantly egged on by his wife to return to the sport. Rai, on her part, is confident that he will be back roaring on the big stage in no time:

Till then, Jitu is proud of watching the young shooters from India take the world by storm. Though chances of him going to Tokyo are slim, he sends his good wishes to the qualified shooters. “As long as India is winning, that is all that matters. This young bunch of players, right from Manu Bhaker to Saurabh to Rahi have the ability to stay calm under pressure, and I know we will return with a few golds in the Olympics. Pakka!”

A few years ago, he was the medal hopeful. Oh, how tables turn!

Swimmers fret over staying out of pools, say it’s taking a toll mentally Press Trust of India - Modified date: August 2, 2020
Their resumption of training still on hold due to government guidelines, elite Indian swimmers say the continued restrictions on use of pools will not only affect their performance in the next few years but is also taking a toll on their mental health. Swimmers...
Read more