Home Tokyo 2020 Revealed: What Bajrang Punia needs to do to ensure a Tokyo Olympic...
FeaturedTokyo 2020Wrestling

Revealed: What Bajrang Punia needs to do to ensure a Tokyo Olympic medal

Top wrestler Bajrang Punia is putting ‘everything’ into his training to ensure he comes up with a ‘blockbuster’ performance at Tokyo 2020. The 2020 Tokyo Olympics is just over six months away, and the country’s best medal hope wrestler Bajrang Punia is putting ‘everything’ into his training to ensure he comes up with a ‘blockbuster’ performance at the showpiece event — the ‘blockbuster’ performance here meaning it will be nothing less than a podium finish. In fact, the top step of the podium is what the whole of India will be hoping for the 65-kg men’s freestyle wrestler to achieve in Tokyo.

And one man, who is doing all the ‘strategising’ and ‘planning’ behind the scenes, away from the public glare is his Georgian personal coach Shako Bentinidis.

The 44-year-old former three-time Olympian is famously remembered for showcasing his ‘frustration’ over the poor officiating in Bajrang’s 65-kg semifinal bout against home favourite Daulet Niyazbekov at the 2019 World Wrestling Championships held in Nur-Sultan, Kazakhstan. Shako, who had represented Georgia at the 2000 and 2008 Olympics and also represented Greece at the 2004 Olympics, was livid at the appalling officiating in that highly controversial bout, where a visibly tiring frazzled Niyazbekov was allowed ample time to catch his breath and he was not served any warning.

“It all happens in the spur of the moment of about five-six seconds. The way the referee handed four points to the Kazakh grappler for the throw was unfair, as he should have awarded two points. But it’s all in the past and it’s time to move on,” recalls Shako, who had reached the quarterfinals in the men’s freestyle 74-kg category at the 2008 Olympics, in an exclusive interaction with The Bridge.

The confabulation veers towards Bajrang’s preparation roadmap for the Tokyo Olympics and Shako talks about the importance of strong starts in a six-minute bout. Shako pointed out:

The personal coach of the country’s ace men’s freestyle wrestler believes Bajrang has qualities that make his job easy. “He is a disciplined guy and does all the right things fitness-wise. He is nothing short of a star in India.”

“Having said that, Bajrang has to work on his concentration — concentration is not an issue with Bajrang only but with many other wrestlers. If Bajrang can give his full concentration, he can do bigger things on the mat. He realises this and we are striving to iron this out,” says Shako who has been Bajrang’s personal coach since February 2018 — first signed up by JSW Sports and now on the rolls of the Wrestling Federation of India.

Shako says Bajrang is making progress on his feeble leg defence and the upcoming tournaments will bring this to the fore. “Leg defence has been Bajrang’s Achilles Heel. He is religiously working of fixing this weakling and I’m sure Bajrang will get better and better on this front,” he says exuding loads of positivity.

Just to get a realistic perspective of things, the men’s freestyle 65-kg category like other weight categories will be exceedingly competitive – it has the likes of world number one Gadzhimurad Rashidov of Russia, Daulet Niyazbekov of Kazakhstan, Japan’s Takuto Otoguro and Ilyas Bekbulatov of Uzbekistan. “There are many big names in the 65-kg category. Bajrang has to stay focussed and learn to take less pressure. When the pressure gets the better of you, you leak points something Bajrang has to focus on,” Shako pointed out.

Bajrang is currently training in Turkey and will head to Italy where an International Ranking Tourney will be held at Rome from January 15-18. Shako will join Bajrang in Italy and the duo will subsequently leave for Azerbaijan for a three-week training stint before they return to India in February for the 2020 Asian Wrestling Championships that will be held in New Delhi from February 18-23, followed by the Asian Olympic Qualifiers that will be held in China from March 27-29.

Shako, who will complete two years as Bajrang’s personal coach in February, is aware of the lofty expectations of the Indian fans from Bajrang. “Olympics is a big stage and we will do everything possible to get the best out of Bajrang. Keeping fingers crossed,” he signs off.

After Indian wrestler Bajrang Punia went down to former world champion Takuto Otoguro of Japan in the freestyle finals of the 65 kg weight...
Read more
News

Jitender Kumar sealed his place in the Indian team for the Olympic Qualifiers by reaching the 74kg final at the Asian Championships even as...
Read more
What's Latest

Even as all medal hopes lie on wrestlers Vinesh Phogat and Bajrang Punia in the upcoming Tokyo 2020 Olympics, another grappler from India has...
Read more
129,563FansLike
11,096FollowersFollow
6,634FollowersFollow 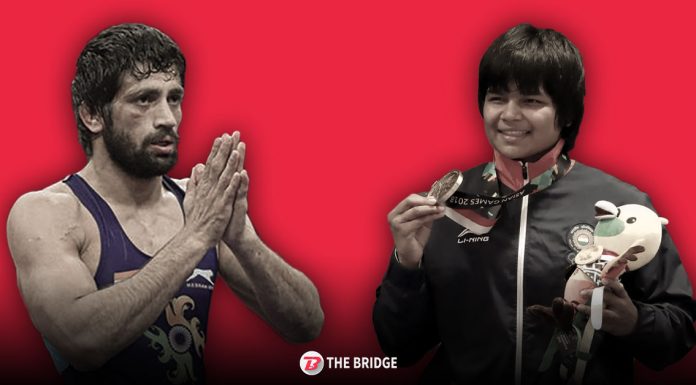