Home Players Speak Unlike Rio 2016, I want to make it count at Tokyo 2020...
FeaturedPlayers SpeakSwimming 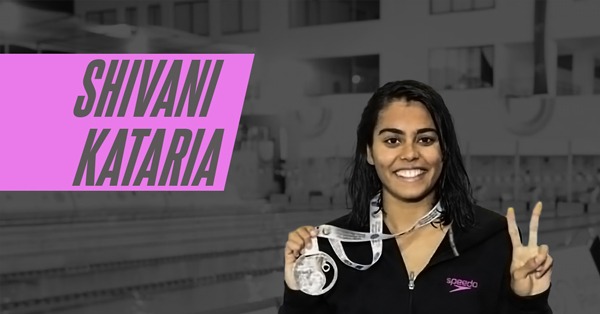 I never had the thought that I would go on representing the country one day and the moment of reckoning hit me when I was landed in Rio De Janeiro alongside other athletes to represent India at the Olympics in 2016. It was a dream come true for me, and there was an emotional outpour going into the Olympics. Though the result was not something which I had expected, I will give everything to be a part of the Olympics again.

My journey started when I was just six years old and was staying in Gurgaon, where I was born. The love for swimming developed at the summer camp at Baba Gang Nath Swimming Centre near my house. I didn’t know, but just going there got me slowly hooked to swimming. Besides, I was also playing tennis. It was at that swimming centre, a team of swimmers were being trained to pursue professionally. I enrolled in that team, and gradually, my performance started improving. At the same centre, my doors were opened, and slowly I transitioned from performing at the district level, then to the state level and then the national level. My coaches were immensely supportive and seeing my performance, and they suggested me to move to Bangalore to take my game to the next level.

In 2013, to pursue the bigger goals, I shifted to Bangalore in 2013 and enrolled myself in the Dolphin Swimming Club, and from there, things started shaping up. That year was a watershed year for me, and I went to take part in my first international meet at the Asian Youth Championship, where I finished sixth. My performance slowly improved, and in 2014, I went to participate in the Youth Olympic Games in Nanjing, China.

In 2015, I got a scholarship from FINA to train under a Spanish coach at a FINA camp at Thyanpura in Phuket, Thailand. The camp was pretty hectic, as we were swimming for three sessions every single day. However, training alongside other swimmers from Southeast Asia had a significant improvement in my learning curve — both in swimming and in life. The FINA camp was where I realised I could be going to the Olympics in 2016 as the sole female swimmer from the country. I have to say that was the most significant moment in my life. However, nothing could beat the feeling of becoming the best Indian swimmer in 2015, when I clinch the Gold in 100M Freestyle at National Games.

I can really say that life has taken its course from small beginnings to significant achievements and a lot of credits goes to my parents. My parents played a crucial role in my journey. It wouldn’t have been possible without their support. It was my dream to perform at a global stage, and because of that, they did not hesitate to come to Bangalore, though I was pursuing my studies from Gurgaon. Either my mom or dad always stayed with me, and I am thankful to them to support me both financially and emotionally.

It is often hard to pursue sports and studies together, and usually, one has to make choices between the two. Thanks to my parents, I could do both continuously. I am pursuing my Bachelor of Arts degree simultaneously with swimming. Since I am not that much a social person, I invest my time with my family and my studies. Whenever I am travelling, I keep my books to prepare for college exams. I am dedicating some time to studies at this moment so I couldn’t be a part of the Speedo Invitational Meet in Mumbai on 17th November. I am a Speedo athlete and being a part of such an amazing organisation has helped me immensely. I will also miss out on the South Asian Games this December as I am in my final year of graduation and planning to complete this year.

Today, I feel India has a good swimming team because I think our young swimmers have had a change in their outlook. We are continually seeing our seniors and their performances motivate us further to give our best shot. When I used to see my seniors and spoke to them, I felt like it was always possible for me. We can see swimmers like Srihari Nataraj who have developed the mindset of a champion, and that’s why he is performing so well. My inspiration has been Shikha Tandon as we went to participate in the same events of swimming in the Olympics. Besides, Virdhwal Khade is someone I look up to.

I know this is the pre-Olympics year, but I don’t want to rush on things. The B qualification mark for Olympics in the 200m freestyle event is 2:02 minutes, which I wish to attain and that’s why I will focus on training the rest of this year and then go on participating at the FINA events in March and April in 2020. The 2016 Olympics was a big moment for me, but I want to make it count at the Tokyo Olympics. Being the best in 200metres freestyle in the country right now doesn’t deter me from participating in the other races. At the Asian Age Group Championships in Bengaluru in September, I competed at the 100m, 200m, 400m, 800m and even the 1500m events, which has undoubtedly lifted up my morale.

Here we take a look at how the postponement of the 2020 Olympic Games may have impacted the world of sports.
Read more
Basketball

"No matter how tall a wall is, never stop climbing!" Difficult times come and go, but the only thing that matters is to keep the...
Read more
129,240FansLike
11,355FollowersFollow
6,930FollowersFollow