Home Athletics You can't run away from your problems, you have to stand up...
AthleticsPlayers Speak

You can’t run away from your problems, you have to stand up and fight | By Dutee Chand I got into running because of my elder sister.

When I was a kid, of around five or six, she had been taking part in long-distance races. She told me that Dutee, you also start running and see the benefits.

To be honest, I wasn’t overly excited by this prospect at first. I said to her that what is the need for me to run when you are already doing it so well.

Plus in the village, there is no need to take part in any such things. One either studies or helps their parents with daily work. Then, I was studying. Therefore, in the beginning, I wasn’t very excited about the idea of running. 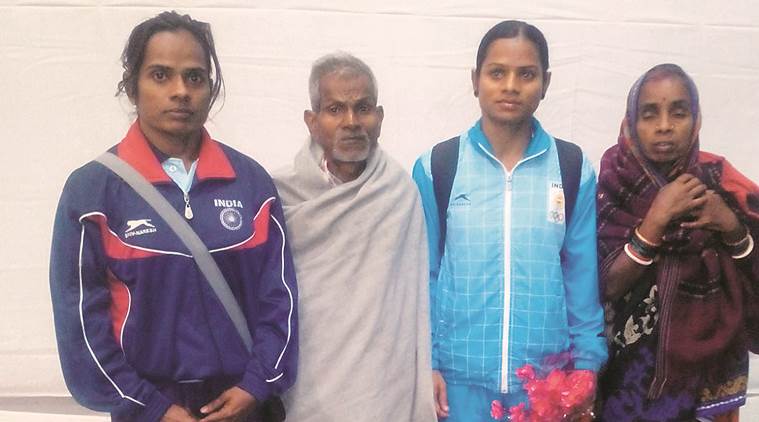 However, my sister was not giving up on me so quickly. She told me to start running to take part in the annual sports day at our school. Whoever won on the Annual Day would receive many prizes including book, pen, and slate. That peaked my interest a little.

Plus there was my sister, always behind me and pushing me to run. She told me that no additional money would be spent if I start running. Her assurances finally drove me towards the tracks.

However, there was another problem. I was at the tracks alright, but I didn’t know what to do next.

How much do I need to run?

Do I need to run in any specific way?

It was all very new to me.

Once again, my sister came to my rescue. She asked me to run one to two kilometres every single day. My village had no grounds or open spaces where I could run. However, there was a river close to where I lived. On the banks of that river was where I first began to run.

Sports were not followed diligently in my village.

Whatever sports were there, were limited to the mainstream ones, such as cricket and football. Nobody knew about running as a sport. So when people used to ask me that Dutee, why are you running? What will you gain with this? I just used to tell them that I am doing this because my sister told me to.

I started running, I started practising, and slowly, I started winning as well. I did okay on my school’s annual day and earned more than one Gold medals over the years. Seeing me do so well, my elder sister told me that I should pursue this field even further.

I interviewed to be taken under the Orissa state’s team. I passed all the interviews, as well as, the physical tests. In 2006, finally, I joined one of the sports hostels. I stayed there for the next few years, studying and practising at the same time.

I got selected for the nationals and performed well there also. Seeing athletics as a natural talent within me, my sister told me to focus on running entirely. She said to me; you will go to international competitions and earn a lot of fame if you succeed as an athlete.

As a result, I finally committed myself to a field which I was sceptical to join at first.

I finally started coaching with a national coach in 2006. I have changed three coaches since. Not because they were terrible, but because they all retired!

My first coach didn’t change many things, although he did improve me. My second national coach shifted me to sprints. I used to do long distance running before that. He wanted me to do 100 and 200 meters. I, however, wanted to do 200 and 400 meters. SO we stuck with that.

Under my third coach, I finally shifted to 100 and 200 meters, and have been stuck with that ever since.

A lot of people have helped me become who I am today– my coaches, my supporters, my family. However, the one person who was constant throughout my journey, in case you haven’t caught the drift by now, was my sister. She was my inspiration through this whole process.

She was my coach, my guidance. She was everything to me. My sister was the one who gave me a career in sports. She took the entire responsibility of developing me both as a person and as an athlete. I owe, whatever I am today, to her.

I have faced my share of stressful situations. Discrimination is something that has happened to me and has affected me personally.

Thankfully, one thing I never had to face was the gender divide. Yes, there were problems in my village, as girls are usually assigned to do household tasks. But when I finally moved to the sports hostel, everything became better. There was no discrimination there. Perhaps the reason for that is that there were very few athletes in the hostel at my time.

However, the worst experience of my life was when I was suspended. For the wrong reasons as well.

There are several procedures and tests that we athletes have to follow. Doping test is perhaps the most heard of. However, there is another test for Testosterone levels.

In case you don’t know, Testosterone is a hormone found in our male counterparts. Women have testosterone as well, but it is in very minute quantities. However, in very few women, the Testosterone levels are higher than usual.

This happened in my case. The Testosterone levels in my body were found higher than usual, and as a result, I was banned from running competitively. Of course, I wasn’t the only athlete who was affected by this. Several others were with me.

I am not one to take no for an answer, however. Feeling discriminated against, I opened a case regarding the same. I argued that the hormones found in my body are natural, I did not increase them by taking any substance. Therefore, why was I being treated like one accused of doping?

The case went to the Court of Arbitration for Sport (CAS) in Switzerland. My counsel and I fought the case, and we were eventually victorious. Once again, I was cleared for competing. I was overjoyed with the decision.

It gave me satisfaction as well, to know that I have not just won my life back but so many others who had to go through the same situation.

However, the time before the verdict was difficult for me. I was regularly questioned. People were scrutinising not only my achievements but also my identity. Apart from the mental torture, there were problems physically as well. I wasn’t able to train, and I was scared of falling behind.

I didn’t fall behind though.

I kept practising and kept myself in shape. My coach told me not to worry and continue to train. One day the verdict will be in your favour, and you will need to return to the track.

Hopefully, no one else will have to face the situation I had to in the future. Everybody came to know about the conditions and the rules that discriminated against specific athletes. I hope that the next generation of athletes does not have to go through the same situation.

I have had my fair share of fights. And now, I am gearing up for another one. The Asian Games are right around the corner, and I will be on the plane to Jakarta. I have been preparing for this for some time now, and once again, I am ready to show the world that I am one of the best athletes in the country.

The kind my sister believed I would eventually become.

Also read: Hounded out of track, golden girl Pinki Pramanik now a face in the crowd

Hima and some other athletes have written to the Sports Minister that they be allowed to train one or two hours a day in small groups at different times so that they can also practice social distancing while training at the same time.
Read more
Athletics

Indian para high jumper, Sharad Kumar is no different when it comes to helping the government in curbing the worsening situation of coronavirus spread.
Read more
Athletics

One of his major concerns was gaining weight from the excessive rest or lack of physical activity.
Read more
Athletics

Chikara, 23, has been banned for using a prohibited substance and his suspension period is effective from July 27, 2018, the Athletics Integrity Unit of the International Association of Athletics Federations (IAAF) said on March 27.
Read more
Athletics

Indian sports icons who did their bit to help fight coronavirus

Here is how the sporting community is uniting and doing their bit in India's fight against the COVID-19 pandemic.
Read more
129,191FansLike
11,390FollowersFollow
6,958FollowersFollow The Bridge Desk - Modified date: March 30, 2020
Under the present circumstances, the All India Football Federation (AIFF) is considering several possibilities, including the cancellation of I-League
Read more