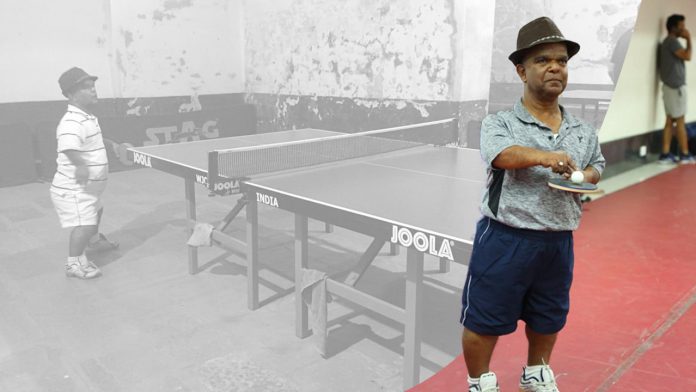 His short height made him the target of much teasing in childhood, but India’s first World Dwarf TT champion Harendra Trivedi says his achievements have shown that lack of height has little to do with ability. Here is his account:

My introduction to table tennis happened when I was quite young. I was about eight years old and I stumbled onto the game by accident.

One day I had to miss school and went to meet a friend who was playing table tennis at a local club in Ujjain, where I am from. I was fascinated by the game and asked him to teach me. His response was to insult me.

My friend laughed at me and said, ‘you are shorter than the table tennis table. You will never be able to play’. I felt very insulted and I could not sleep that night. I made up my mind that I would somehow learn the game.

Keen interest in the sport

I started going to the club regularly to watch people play table tennis and learn. One day a senior player by the name of Manohar Sharma took note of my interest and offered to train me. I started playing regularly under his training.

Mr Sharma was a university-level player and regularly played at the club. He took a lot of interest in me and encouraged me a lot. I trained under him for eight to 10 years. It was under his guidance that I won the junior-level title in table tennis in Ujjain district. From then on I started playing at the state level.

Sharma helped me improve my game in the early years in a major way. He taught me defensive tactics. Above all, he taught me the importance of fitness and working out regularly. Sharma would tell me, ‘You have to work 100% harder than able bodied players to better your game and match them.’

I took his words very seriously. Every morning I would hit the training grounds one hour before all the other players came in. I would run and stretch and do many other exercises. This helped improve my fitness tremendously. It gave me a major advantage as I was able to cover the length and breadth of the table tennis table very easily. This helped me overcome the disadvantages of my short height.

After Sharma, the other coach who had a major role to play in enhancing my game was Motilal Purania, whom I met at a state-level tournament. I joined a 21-day camp which he was running where I learned a lot. Purania helped me hone my top spin shot.

One particular player to whom I owe a lot of Kamlesh Mehta, six-time national champion in table tennis. Mehta was the highest ranked Indian table tennis player in Asia and the Commonwealth, and was a great teacher to me. He would often come to Indore for games and we would meet. He would take the time out to watch my game and give me tips and motivate me.

Like Mehta, many senior players have helped me. Jan Ove Voldner a former player from Sweden, is someone I hold in high esteem. I have never met him but I used to watch his videos closely and learn. He is known as one of the greatest table tennis players and I was always inspired by his competitive streak. Watching his videos helped me polish my top spin shots further.

It’s the new players who would mock me or take me lightly because of my dwarfism. They would think I was too short to play competently. I would just tell them ‘Come and play against me and I will show you’. I would always beat them. They could never return my deep top shot. That is my edge, one that few can return. Over 30 years of experience

Since 1978 I have been playing table tennis. I am 52 years old and I have played at state, national, and international-level competitions.

My high points are many. One was beating the state champion from Madhya Pradesh at a national-level event. Then last year, I beat a top ranked Chinese player to win the 2017 World Para Dwarf Championship title in Ontario, Canada.

Now I mostly play veterans matches. Just recently, I played at a Veterans’ Event in Jaipur. Playing table tennis matches alone is not often to sustain a livelihood. I coach at a private school and in the evening I train experienced players at a local club. I invite those who show potential at the school to train at the club.

I see a lot of potential in the younger generation dwarf table tennis players, especially Om Lotikar from Maharashtra. He plays very well and I see him bringing great name for India.

People make fun of my lack of height even today. I still face comments like ‘he is shorter than the table’. I have learned to ignore them and not feel bad. I know they say it out of ignorance.

What I choose to take heart from is the support I have received in my journey over the years from players and authorities. People like para TT players Dhanraj Chaudhary, who regularly organizes events as well as Jayesh Acharya and Pramod Gangrade, who are associated with the Madhya Pradesh table tennis associations.

Today my goal is to motivate other dwarf table tennis players. I tell them not to feel shy or embarrassed, but to work hard at their game. My message to them is to work very hard at whatever they do. If you have a disability, you have to work 100% harder and no one can stop you.

The start of July is the half-way mark of 2020, which has been an eye-opener more almost every one of us. The global crisis...
Read more
Fitness & Wellness

Exercise is great for physical health but it is not the only factor that is involved when it comes to fitness and mental health....
Read more
131,529FansLike
12,354FollowersFollow
7,206FollowersFollow