Opinion: Not Sarita, but Pooja Dhanda could have won India another Olympics 2020 berth 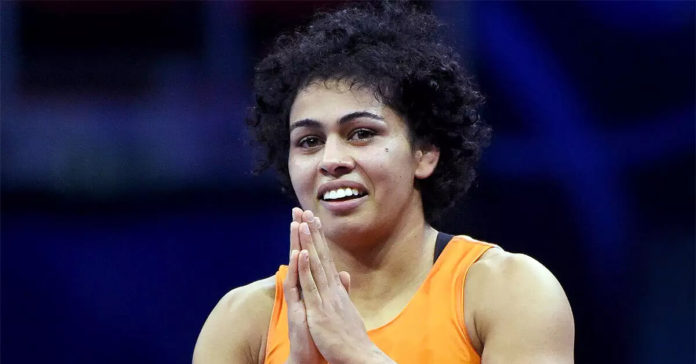 Backed by impressive performances at the 2019 World Wrestling Championships, three Indian wrestlers have already earned their berths at the Tokyo 2020 Olympics. Starting with Vinesh Phoghat (53kg), world no. 1 wrestler Bajrang Punia (65kg), as well as Ravi Kumar ( have sealed their entries into the quadrennial sporting extravaganza.

As much as Indians cherished and applauded these achievements, we could have been beaming with further pride had Pooja Dhanda earned an Olympics berth. Pooja showed promise competing in the 59 kg for the first time where she reached the semi-final stage.

Pooja, a favourite in 57kg

However, she missed out on the Olympics berth since 59kg is a non-Olympic category. Pooja, who participated in the 57kg category in 2018 World Championship and furnished a bronze medal, couldn’t participate in the same category. She had surprisingly lost her place to Sarita Mor in the World Championship trials conducted by Wrestling Federation of India (WFI).

With experienced Pooja absent from the line-up, Sarita had a tough ask to defend the medal at the World Championships and unsurprisingly, she lost 1-5 to Anastasia Nichita in the 57kg category in the very first round of the tournament.

Going by the legitimate rules, even the greatest names in Olympic history have had to get to the Games after being through trials. However, for Indian athletes, challenges pertaining to participation are not limited to their performance or training but have rather moved to an alleged political conundrum by the national authorities.

Even the legendary boxer Mary Kom gained a free pass as she was named in the contingent for the Boxing World Championship without trials. A boxer with unmatched pedigree, Mary Kom suggested that proven boxers should not undergo selection trials. The Manipuri justified that she did nothing wrong by asking for an exemption from the trials of the World Championships.

Taking note of such situations, we cannot deny the fact that presently, we have different selection procedures for different athletes and sports. If a wrestler was to be allowed to gain World Championships berth based on form, why was Pooja Dhanda not allowed to participate in her pet 57kg category, which is hallowed as the most competitive category in women’s wrestling?

In a bout at the trials, where Pooja was dubbed as the favourite, Sarita Mor upstaged the 2018 World Champion to eke her out and earn her Worlds berth.

However, was it at all a fair trial? Not quite.

Just prior to the selections, the Wrestling Federation of India (WFI) revamped their rules, allowing relaxation of 1 kg to few participants to offer them a chance to compete in lower weight categories during the World Championships trials in Lucknow, earlier in the year.

So Sarita Mor (59kg) pitted against Pooja Dhanda (57 kg) was automatically an unfair battle with both grapplers representing different categories. It also implied that the wrestlers competing in specific weight categories for some time suddenly had new rivals from higher divisions in a vital selection trial.

However, despite the loss, Pooja found a silver lining as she travelled for the Worlds to fight in the 59kg — a non-Olympic category. She earned her spot without any contest as there were no competitors in that weight categories.

This happened because WFI had disallowed seven wrestlers from taking part in the trials on the grounds of indiscipline after they stayed away from national camps without intimation. Altogether 25 women wrestlers were barred from attending the national camp. It included Olympic bronze medallist Sakshi Malik.

57kg — toughest among the lot and Pooja’s success

Perhaps the deepest weight class at this year’s World Championships was the 57kg. With the Olympic under a year away, this weight category saw wrestlers flock in from several different weight classes. While the presence of defending world champion, both 2018 world finalists from 59 kilos dropped down and made this one of the most challenging weights on the women’s side.

In 2018, Pooja was placed in a lower bracket with champions such as Rio Olympic and defending world champion Helen Maroulis, 2017 Worlds silver medallist in 55 kg Adekuoroye Odunayo, the best wrestler of the year, China’s Rong Ningning. Looking at draw one wouldn’t have predicted a medal for India in 57kg category. Pooja’s campaign in world championship started from the qualification round, where she battled past Olga Khoroshavtse from Azerbaijan.

The next one was against 2017 Worlds silver medalist Adekuoroye Odunayo in line, a wrestler who already defeated Pooja Dhanda in the finals of Commonwealth Games. Pooja defeated Odunayo by 7-6 in pre-quarters finding the winning move in dying minutes.

In Quarterfinals Pooja faced Rong from China, current world no.1 in the 57kg category. Though Pooja Dhanda’s world championship finals dream comes to an end at the hands of Rong, the hopes of repechage were high and as it was said she was pulled into repechage bracket as Rong made it to finals. Pooja capitalised the opportunity and made her way through a career defying bronze medal after the Youth Olympics silver in 2010.

Had Pooja been participating in her regular 57kg category, India could have had a better chance, maybe not at winning a medal owing to the overall competition. However, a semi-finals entry could have sealed would have sealed another Olympics berth for India, which Sarita Mor failed to elicit.

ISL 2019-20 playoffs: Fixtures, when and where to watch and venues

Sarah Waris - February 26, 2020
As the battle intensifies to be crowned as India's champions here is all you need to know about the playoff stage of ISL
Read more