Over a long period of time, taekwondo started at an uncertainty after the Sports Ministry cracked the whip on the faction-ridden TFI, de-recognising them.

The sport of taekwondo has taken many ‘backward’ steps over the past many decades. Over a long period of time, the sport started at an uncertainty after the Sports Ministry cracked the whip on the faction-ridden Taekwondo Federation of India (TFI), de-recognising them. Clearly, the sport of taekwondo has suffered a lot over many years now owing to consistent infighting, ego tussles and the inability to rise above everything in the larger interest of the sport.

The de-recognition of the national taekwondo federation pushed the sport into limbo. In fact, there were signs that the sport would wear an ‘organised’ look when the Indian Olympic Association (IOA) in July 2019 constituted a five-member ad-hoc committee with Namdev Shirgaonkar as chairman with a mandate to carry out the election procedures within a stipulated time-frame.

The IOA-constituted ad-hoc committee headed by Namdev Shirgaonkar appeared to have brought about a semblance of normalcy in administering the sport in the country. The ad-hoc committee for taekwondo formed a selection panel with World Taekwondo representative Milan Kwee of Singapore as the Chairman and with the help of Sports Authority of India (SAI), concluded its three-day selection trials at Aurangabad to pick the national team for the South Asian Games (SAG) that was held in Nepal.

The decision of the World Taekwondo was intimated to the IOA and India Taekwondo was told that it must hold a general assembly and fresh elections latest by May 2020. “We are soon meeting up with World Taekwondo top-brass so that we can align our calendar with their international programme. We also want to activate our national activities in terms of conducting open trials, domestic competitions. We will work closely with the Sports Ministry and SAI because without their funding support we cannot send teams to international competitions,” says India Taekwondo President Namdev Shirgaonkar.

India Taekwondo wants its players to gain as much international exposure as possible ahead of the Asian Olympic Taekwondo Qualification Tourney that will be held at Wuxi, China on April 10 and 11. “We are looking at the possibility of sending our national team for a training stint in Turkey, followed by another exposure trip to Iran. Both Turkey and Iran are strong taekwondo nations and training with the players of these countries will stand our taekwondo players in good stead,” says Shirgaonkar.

“The Sports Ministry and SAI are currently busy with the Khelo India Games and we are awaiting approval for these two trips,” quips the India Taekwondo President. The taekwondo event at the 2020 Tokyo Olympics will feature eight weight categories – four in men’s section (58-kg, 68-kg, 80-kg, and +80-kg) and four in women’s section (49-kg, 57-kg, 67-kg, and +67-kg).

The new India Taekwondo president is convinced that there is no shortage of taekwondo talent in the country. “A big country like India produces so many talented taekwondo players and it is all about coming together as one unit and performing for the country. Infighting has pushed Indian taekwondo back, but it is time we bury all differences and contribute to the sport in a meaningful manner.” 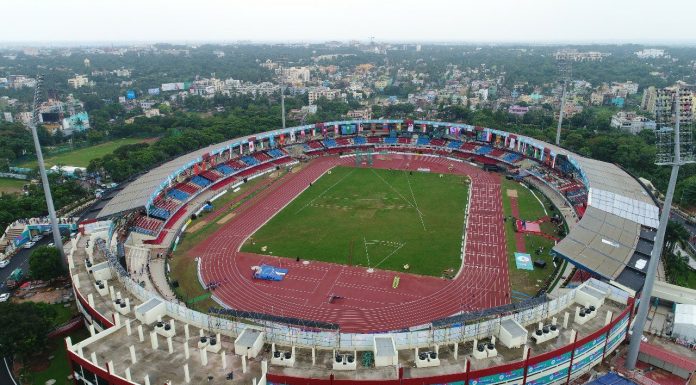 The Bridge Desk - February 21, 2020
kalinga stadium in Bhubaneshwar has been finalized to host FIFA world cup qualifiers against Qatar on 6 March.
Read more