Considering posts about breastfeeding that have gone viral for the empowering messages they send, it's clear a lot of work still needs to be done in order to further normalise it. 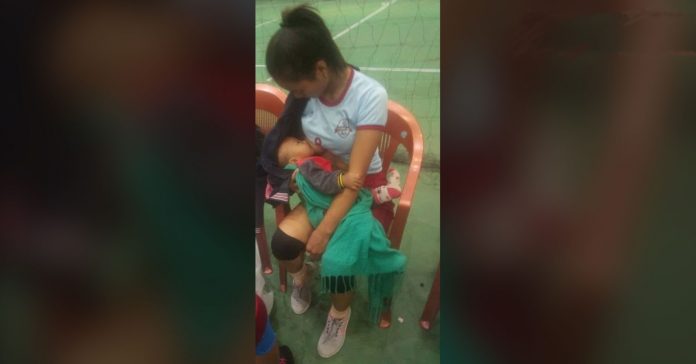 Lalventluangi, a volleyball player from the Tuikum Volleyball Team, is earning a lot of praise after a touching photo of breastfeeding her newborn baby went viral on social media in the midst of playing a game. The image has been shared on Facebook by a user named Ninglun Hanghal. Its original source can be traced back to Linda Chhakchhuak as mentioned in the post credit.

Lalventluangi needed to feed her seven-month-old baby during her volleyball game’s intermission and photos of her doing so are incredible. In a post that has been deemed ‘amazing’, Lalventluangi can be seen holding her baby and feeding her in what looks to be a volleyball court, dressed in her volleyball gear.

“A stolen moment to feed her 7-month-old baby in between a game was captured making it the picture mascot of the Mizoram State Games 2019,” read the excerpt from Ninglun Hanghal’s Facebook post. The image has since gained praise on social media.

The comments on the post have been overwhelmingly positive. ‘Bravo‘, one user wrote. Another simply added, ‘Wow amazing!’ As healthy and natural as breastfeeding is, women still face a lot of judgement and shame doing so in public. Netizens applauded Lalventluangi’s  ‘attitude of dedication and courage, taking along twin responsibilities of a sportswoman and motherhood in her stride’. The post has definitely gone viral for the best reason, as Mizoram Sports Minister Robert Romawia Royte has ‘decided to award her a sum of Rs 10,000 as a token of appreciation’.

Considering the many posts about breastfeeding that have gone viral for the empowering messages they send, it’s clear a lot of work still needs to be done in order to further normalise it. This social media post clearly serves as a reminder that breastfeeding is indeed beautiful and mothers a determined bunch that never takes a break from their duties.