Coming of age badminton superstar, Manipur’s Maisnam Meiraba is already a sensation in the Indian badminton circuit. The numero uno shuttler in the U-19 category, Meiraba scripted history by winning a hat-trick of selection ranking tournaments earlier in the year. Of late, he won the Russian Junior White Nights crown without dropping a game throughout the tournament and also finished runners-up in the Junior International Grand Prix.

On the eve of Teacher’s Day, The Bridge caught up with the man behind the success of this teen prodigy- his father, coach, and trainer, Maisnam Romesh Luwang. “They say it takes a village to raise a child,” but Maisnam’s single-handedly has spent tireless hours to construct and design the dream, which Meiraba is living right now.

Romesh, who was a renowned shuttler in the late 80s from the Northeast region opined Meiraba had shown sparks of brilliance from a very young age and believes it’s only a matter of time before Meiraba flourishes at the international stage. With a intuitive mind and a thirst to excel, the youngster has taken giant strides towards growth.

Making headlines in the newspapers, Meiraba is already turning heads with his sublime stroke play and rich repertoire of strokes at such a young age. The success of Meiraba is a testament to India’s growth as a badminton powerhouse and the cultivation of talent at the level.

When chanced upon Meiraba’s biggest strengths, his father conceded that Meiraba has got a tremendous threshold and can push himself to the limit and fight his way out of any situation. The father-son duo shares a pragmatic relationship as well, wherein Romesh reveals that it’s an extremely fine line when you have to coach your own son.

Romesh doesn’t believe in sugarcoating and advocates the need to be direct. While Meiraba is always confident in his own whenever he takes the court, his father feels that the youngster needs to have a more refined attitude in nervy situations.

With an already illustrious career in such a short foray, Romesh is optimistic of greater success from his son. Outlining the deeds required to prosper, Meiraba’s father concluded,

The region of Northeast possesss one of the richest pool of talents for sports all across the nation. Since, the turn of the decade, there has been an upsurge of potential in the region as North East has established themselves as a sporting powerhouse. From Assam to Manipur, the likes of Mary Kom, Mirabai Chanu have established new yardstick for success. Meiraba is the latest sensation from the region, adding badminton to the long list success stories from Northeast. 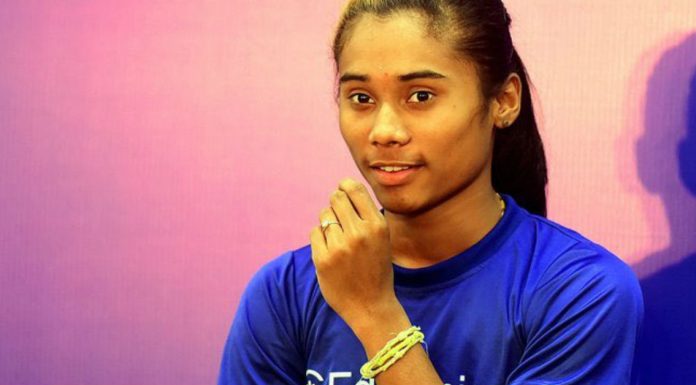 Press Trust of India - Modified date: March 31, 2020
Hima and some other athletes have written to the Sports Minister that they be allowed to train one or two hours a day in small groups at different times so that they can also practice social distancing while training at the same time.
Read more