Football: The fastest player of India, Sanju Yadav doesn’t want to be a one-trick pony 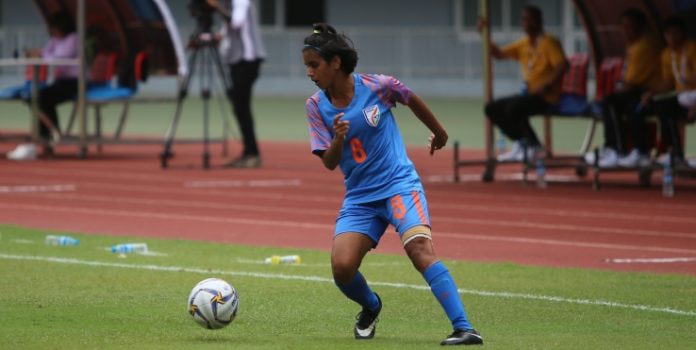 Sanju Yadav is amongst the generation of Indian footballers who have spent a considerable part of their formative years watching and learning from the senior men’s national team marksman Sunil Chhetri.

Even at the young age of 21, Sanju has gone on to become one of the regulars in the Indian Women’s National Team starting XI, sprinting her way up and down the left flank. However, the senior women’s national team winger still draws inspiration from Chhetri.

“I am a big fan of Sunil Chhetri. I used to watch him play when I was younger, and I still try to watch his matches whenever I can, be it for club or for the country,” said Sanju. “The dedication with which he plays his football is equal to none.”

The 21-year-old further went on to explain the big role that Chhetri, who was named the AIFF Men’s Footballer of the Year 2018-19 earlier this week has played in improving football in India, acting as an inspiration to millions of youngsters in the country. “He’s done so much for Indian football,” said Sanju. “He’s been playing for the national team for such a long time now, that an entire generation has grown up idolising him. He is certainly an inspiration to all of us who want to move Indian football ahead.”

The senior women’s team is currently training at a camp in New Delhi, which is being conducted by Head Coach Maymol Rocky, as a part of the side’s preparation for the upcoming COTIF Cup in Spain, and the AFC Women’s Championship Qualifiers later this year. Sanju, who is one of the fastest players in the team revealed that the Head Coach is implementing certain new training techniques at the camp, which is helping the players learn new things. “The camps are longer these days. It helps prepare us for the upcoming COTIF and for the AFC Qualifiers,” said Sanju. “The number of facilities we have at our disposal at such camps these days are much more, so that really helps us tone ourselves for big tournaments.”

Being one of the fastest players in the team, Sanju is a natural winger for the side. However, the 21-year-old wants to use the camp sharpen the other skills in order to become a more complete footballer. “Speed is one of the stronger points in my game. I’ve always been fast, even when I was a kid. But I do not want to be a one-trick pony. That is why such camps are so instrumental for us. I am working on the other aspects of my game as well, in order to improve my overall play,” Sanju rounded off. Prachyaprachetah Sarkar - Modified date: April 1, 2020
The Bridge got in a candid chat with the 30 years old Spaniard as he spoke about the way to this success, his first experience at India and his plans for the next season.
Read more