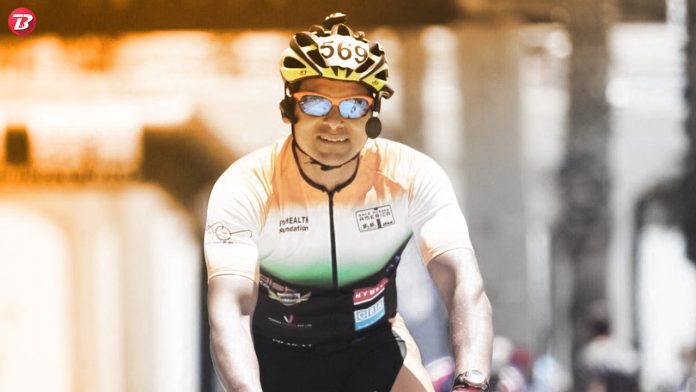 In a huge boost for Indian sports and more importantly the meteoric growth of cycling in India, Dr. Amit Samarth from Nagpur has become the first-ever Indian to complete the Red Bull Trans-Siberian Extreme race, a 9100-km race in Russia.

Touted as the longest bicycle stage race in the world, Dr. Amit reportedly took a staggering 315 hours, 45 minutes and 26 seconds to complete the race and finished fourth overall – only six minutes behind race winner Pierre Bischoff of Germany.

The 2018 Trans-Siberian Extreme race commenced on the 24th of July 2018 at Moscow, Russia and as the race eventually concluded at Vladivostok, Dr. Amit became the first ever-Indian to participate and more importantly, complete the race.

In June this year, Dr. Amit became the first-ever Indian to complete the Race Across America (RAAM) on the first attempt when he crossed the finish line in 11 days, 21 hours and 11 minutes, pedaling for a whole distance of close to 5000 km.

While his achievements are next to none, Dr. Amit’s real spark was ignited when he took part in the 2015 Deccan Cliffhanger, which served as a qualifying stage for RAAM.

Post the Cliffhanger, his preparation for RAAM was given a huge boost when he completed the Full Ironman Triathlon that includes a 3.8 km swim, 180 km cycling and 42.2 run in Busselton, Australia in December 2016, which also gave him the unique feature of becoming India’s first full Ironman athlete.

Three half Ironmans and Deccan Cliffhanger

Once he had completed quite a lot of competitions, Dr. Amit did not step back but instead took to the challenge in order to prepare for the tough path ahead. Three half Ironman marathon wins and the title of the 2017 Deccan Cliffhanger held him in good stead to train for the Trans-Siberian extreme.

After a tremendous run in the RAAM and the subsequent events such as the Deccan Cliffhanger, Dr.Amit took to social media in order to raise funds for his participation in the Trans-Siberian Extreme race which received an overwhelming response as a lot of individuals and corporate companies combined to back the 38-year old cyclist, who finally lived up to the expectations and brought back more laurels to the country.

Indian sports icons who did their bit to help fight coronavirus Team Bridge - Modified date: March 28, 2020
Here is how the sporting community is uniting and doing their bit in India's fight against the COVID-19 pandemic.
Read more