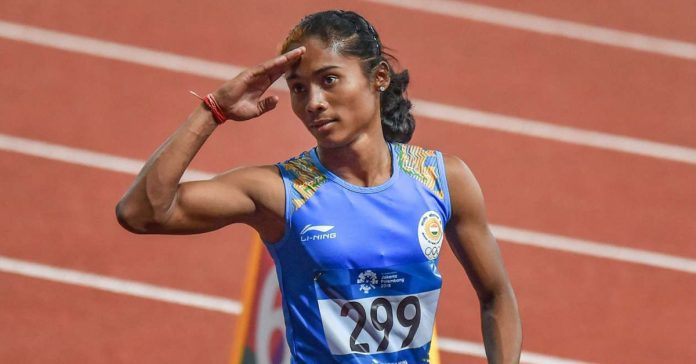 Indian ace sprinter Hima Das will be the torchbearer in the opening ceremony of the Khelo India Youth Games 2020, which will commence in Guwahati on Friday.

The third edition of the Games will commence at the Indira Gandhi Athletic Stadium in the presence of Assam Chief Minister Sarbananda Sonowal, Union Minister for Youth Affairs and Sport Kiren Rijiju. The event will see 20 sports events played by 6,800 athletes from across 37 states. This year, electric cars have been introduced at the venues under the Go-Green Programme.

Das, whose popularity in the country has grown by leaps and bounds in the last two years, is celebrating her 20th birthday today. One of India’s brightest prospects in sprint and track field, Hima won two gold medals and a silver at the 2018 Asian Games in Jakarta which won her the prestigious Arjuna Award by the President of India that same year.

Meanwhile, the Khelo India Youth Games will be played in Assam as scheduled despite the widespread protests in the state against the government’s new citizenship law. Prime Minister Narendra Modi has decided not to go for the launch of the games, giving ‘lack of time’ as the reason for the same. Press Trust of India - February 24, 2020
India will host the Commonwealth shooting and archery championships in January 2022 and the medals from the two events will be counted for "ranking of competing nations" at the Birmingham Games, the CGF said on 24 February.
Read more