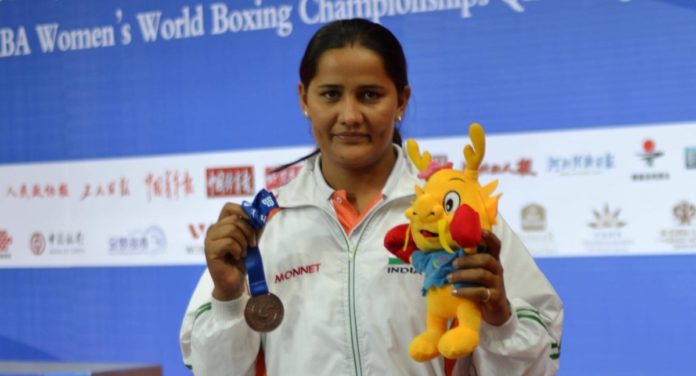 Indian women’s boxing circuit has quite a few ‘proud’ mothers, who have exuded a kind of ‘determination’ that will make all and sundry proud. Six-time World Championship gold medallist MC Mary Kom and 2006 World Championship gold medallist Laishram Sarita Devi (who also has two bronze medals to her credit) are well known in Indian boxing circles. Two-time World Boxing Championship bronze medallist boxer Kavita Chahal is another ‘determined’ woman, who has returned to the ring after childbirth and now carries an extra dose of resoluteness to dish out her best performance at the 2019 AIBA World Boxing Championships that is being held in Russia.

The hardships have been far too many for this heavyweight (+81-kg) woman boxer along the way, but they haven’t dented her morale from once again hitting the ring after taking a break after she gave birth to her son Viraj. “It is never easy to resume competitive boxing after becoming a mother. But I get a lot of inspiration from Sarita didi and Mary didi and how they came out of childbirth to win laurels for the country. I consider myself extremely lucky to enjoy the unstinted support of my husband Sudhir Kharb, who does everything possible to ensure I could regularly hit the training sessions at the national camp and play in tournaments,” says the soft-spoken girl, who hails from Nimri village in Haryana’s Bhiwani district.

The mention of husband Sudhir Kharb opens Kavita up, and she revealed how her marriage to him had worked wonders. “Ours was an arranged-cum-love marriage, and we liked each other and went ahead with our marriage after getting the approval of our respective families. He takes care of my son so that I can focus on my boxing and I don’t think without his support I could have boxed for my country,” quips the Haryana girl who interestingly was a skilled kabaddi player before she switched to boxing. The 33-year-old adds:

Kavita announced her return to international boxing when she won the heavyweight gold medal at the 2019 World Police and Fire Games held at China in August. The podium finish marked her arrival in the Indian boxing scene as her pregnancy-induced break saw her lose the heavyweight spot to state-mate Seema Punia, who had represented India at the 2016 and 2018 AIBA World Boxing Championships in the heavyweight category. The Haryana Police Sub-Inspector said:

Kavita is the first Haryana woman boxer to win the coveted Arjuna Award in 2013 – she has pocketed the national crown eight times and is also a four-time Asian Championship medallist. She was also rewarded in terms of cash awards after bagging bronze medals at the 2012 and 2010 AIBA World Boxing Championships. Employed with Haryana Police as Sub-Inspector, she does not deny that she deserved better things in life. With a heavy heart, she says:

On the upcoming 2019 AIBA World Boxing Championships, Kavita is keyed up to make a big impression. “Boxers from Russia, China, Turkey and USA are going to be formidable, but I will be backing myself to land a hat-trick of World Championship medals and cement my heavyweight category spot,” she signs off on a sanguine note.