Home News "I was asked if I were from moon," says hijab-clad powerlifter Majiziya...
NewsWeightliftingWhat's Latest

“I was asked if I were from moon,” says hijab-clad powerlifter Majiziya Bhanu 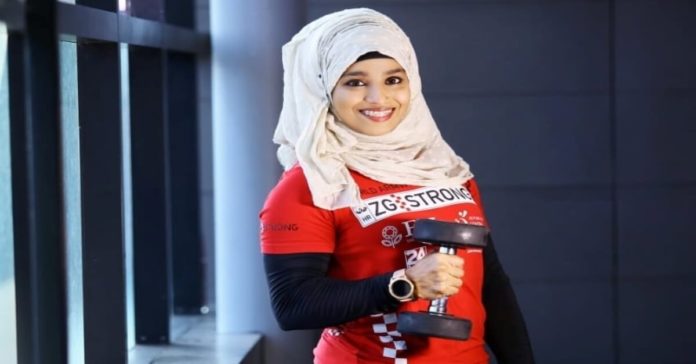 Dressed in a full-sleeved black attire and a hijab around her neck, powerlifter Majiziya Bhanu remains a symbol of strength and inspiration. Belonging to an orthodox Muslim household in Malabar, Kerala to winning the Best Lifter Award in the World Powerlifting Association’s World Cup held at Moscow last year, Bhanu has seen it all. Speaking at ‘We the Women’ convention, Bhanu opened up to Sujata Kelkar Shetty, where she relived the nasty comments that came her way for playing the sport with a hijab and how she ushered aside the negativity a calm determination.

“I am a Muslim from Malabar in Kerala, which is very conservative, so it was hard for me to be into sports. In my family, girls don’t even go to college, so to take up something that will push me into the public gaze was met with a lot of discouragement from my family and even social media.”

Bhanu took an interest in the sport of boxing initially in 2016 during her third year of college. However, once she realized that she could not enter the ring with braces, she turned to powerlifting, and won the “Strong Woman of Kerala” award thrice in a row. She also won the Asian Powerlifting Championship in 2017. Asked how she took to sports despite no backing, Bhanu replies, “I chose sports because I wanted to bring a change in the Muslim society. I wanted to show that women are capable of creating their own identity as well.”

As the conversation shifts towards her decision to wear the hijab even while playing, Bhanu says that hijab-clad women are not at a disadvantage due to the same. “I wear a hijab and I am proud of it as it’s my identity. I felt special and unique when I was on stage wearing one. If a woman is free to show her body, why should she not be free to cover it? I want to let the world know that the hijab is never an obstacle for a woman who wants to achieve the impossible. It’s not just a piece of cloth, it offers strength and dignity.”

Bhanu participated in the 40th World-Arm wrestling championship in Turkey last year, before she went on to win the best lifter award in Moscow. The youngster is now gearing up to play for India in the powerlifting World Cup in December next month.

Talk about how mental strength is important in the sport and how she tackles criticism, Bhanu emphasized on challenging the negativity into a positive influence.

“In the last event that I participated in, I was made fun of. They made fun of my hijab and passed comments like, “she is from the moon.” Once my turn to lift the weights came, I was determined to do well. Earlier, my best lift had been 380kgs, but I managed to lift 400kgs in that event. They ultimately came up to me and apologized,” said Bhanu amid a round of applause.

Breaking stereotypes with nonchalance, Bhanu is a symbol of what women can achieve, if they just dare to dream. The Bridge Desk - January 26, 2020
With a vision to spread the fitness virus across all age-groups of the society, the sixth edition of the Maximus Nagar Rising Half Marathon is scheduled to be held on February 2. With the previous editions having been held in Pune and...
Read more