As many as nine pugilists from Haryana stormed into the semifinals, ensuring themselves medals at the JSW Sports presents 3rd Elite Women’s National Boxing Championships at the Inspire Institute of Sport here today.

They were closely followed by the Railways as eight of their boxers made it to the medal round while All India Police (AIP), had seven of their players with Chandigarh and Punjab, having two pugilists each entering the semifinals in all the ten categories with other state players just filling the vacant slots.

All top boxers, including world championships participants and medalists—Lovlina Borgohain, Pinki Rani Jangra, Simranjit Kaur, Manisha Moun, Seema Poonia—all won their bouts, mostly with RSC verdicts as there were 13 of the contests in the two rings were stopped by the referee, fearing injury to the opponents of these fancied boxers.

But in the opening bout of the day on Ring 1, S. Kalaivani of Tamil Nadu surprised AIP’s K. Bina Devi in 48 kg, receiving a 4:1 verdict in her favour to take on Haryana’s Sanju, who beat Anchu Sabu of Kerala on points (5:0). It was Sanju who paved the way for her statemates to follow suit, showing excellent temperament and maturity

In between, Rajni Singh of Uttar Pradesh, in a close bout, won a split verdict (3:2) against Swasti Arya of Rajasthan to send her packing. Later on, experienced Pinki Rani pounded Chandigarh’s Gargi to win 5:0 in 51kg and other Haryana boxers that moved up included World Championship quarter-finalist, Manisha Moun (54), Neeraj (60), Nisha (69) Nupur (75), Pooja Rani (81) and Anupama (+81).

While much anticipation was there from World Championship Bronze Medalist, Lovilina Bogohain; she won a close bout against Delhi’s Anjali (3:2), thanks to the latter who produced some breathtaking combination punches to keep her better-known rival at bay as the World Championship Bronze medalist would have found it to her chagrin. In fact, the second round entirely belonged to the Delhi pugilist who failed to make any impression in the first but continued really well in the third as well. However, what worked in favour of the Assamese boxer was her first-round blows, mainly the lefts and a few straights which she was able to land on Anjali.

Even AIP’s E. Meemthoi Devi struggled against a determined Sohini from Chandigarh before overcoming her, especially in the third round, to win a 3:2 decision in her favour. Aveet Kaur of Chandigarh did herself a good turn with a nice come back in the third round to win another split verdict in her favour against Manu Badhan of Punjab. The Punjab pugilist was good in patches, and that must have been her undoing.

Kavita Chahal of AIP in +82 kg category, beat the stuffing out of her Kerala rival Anaswara P.M. to win on points (5:0) while Basanti Chanu (64), Sandhyarani Devi (57) and Preeti Beniwal (60), Nikhat Zareen (51kg) too made the medal grade. 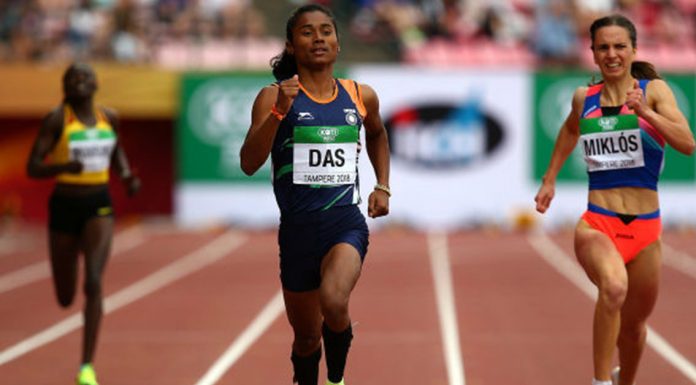 P. Divya Rao - February 17, 2020
Star athlete, Hima Das, who is the World Junior 400-metre champion and Asian Games silver medallist, has shifted to 200m from her pet 400m category as she looks forward to focusing on the speed and the endurance bit for the sport. This decision...
Read more