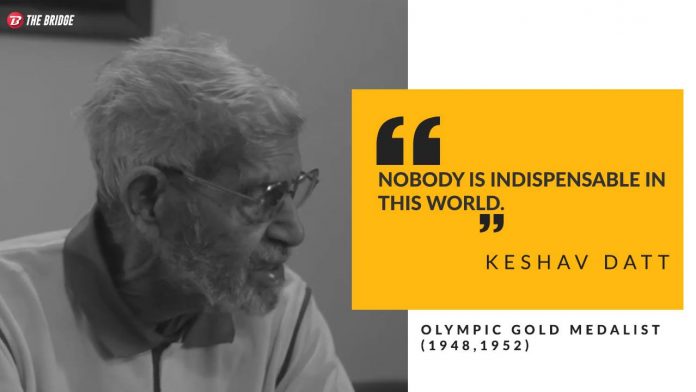 Imagine this. A freshly formed country with the scars of Partition and colonisation yet to heal- India participates in the 1948 Olympic Games in London. Famed for being almost undefeated in Hockey, the team does not disappoint. They reach the finals and win the Gold and what’s more, the victory comes after defeating England- the country that had forcefully colonised India for so long.

When one is out with a motive to meet one of the most prominent members of this team, the team that gave India its first Olympic Gold in the aftermath of independence, the magnitude of the victory is fully appreciated. You may travel through Kolkata’s rickety roads now and find that Hockey is almost non-existent in the major parts of the city. Yet, the state of Bengal still has some remnants of its rich legacy when it comes to the sport. Keshav Datt is one such figure from the past.

This is the heartbreaking story of Keshav Datt- a living hockey legend who was a part of the team that won independent India's first Olympic Gold.Read: https://goo.gl/p8wTcZ

When The Bridge first contacted the two-time Olympic hero in an effort to bring out his story, the entire process was met with a kind of bitterness that one could easily associate with loneliness. In fact, it took nearly a day’s convincing for Keshav Datt to agree to meet anyone at all. And even when he did, the state he was in would be enough to make even the toughest of souls sad.

People close to the Hockey stalwart remember a time when Keshav Datt was a towering figure in National and State Hockey. Born in Lahore, Datt was forced to relocate to Bengal after outbreaks of violence in his hometown prevented his return. He adopted the city as his own and, for its part, Kolkata adopted Keshav Datt in the capacity of a legend. Anecdotes about him speak of how the presence of Keshav Datt was enough to fill the stands at the Hockey game. Having spent most of his playing years at Mohun Bagan, Keshav Datt was instrumental in taking the team to the highest Beighton Cup titles throughout history. Former Bengal Hockey Association President Dr Gopinath Ghose fondly recollects the time a young and fair Datt stepped out on to the ground in Kolkata. “A handsome one,” as Ghose calls him, women came to the field just to watch this legend play. Datt clearly enjoyed the attention. It was a time he was unassailable.

Cut back to the present when in the dreary corner of Santoshpur in Kolkata, Keshav Datt now lives alone with no one but a housekeeper for company. A short auto ride from Jadavpur and we arrive at this well-kept colony of apartments. We enquired about Datt’s residence at the gate. We were promptly given exact directions.

What met us as soon as we entered his house was a strong stench of medicines one would normally associate with hospitals and clinics. A myriad of objects was untidily scattered on a wooden coffee table in the centre of the living room. There was a half-drunk glass of whiskey half hidden among the numerous tablets and medicines which we assumed were prescribed for Datt. On a couch behind the table, looking visibly cross, was Keshav Datt.

“Why are you here?”, was the man’s first question.

We must have looked visibly intimated to be in the presence of a man who had achieved so much for India. The open show of hostility had definitely caught us off guard. Perhaps he had realised this because a second later he added, “I am sick. I am unable to walk. I do not think I can help you.” This time, the tone of his voice was slightly softer.

Why is it that Keshav Datt’s story had been untold up until now. A simple search of his name on the internet would make one wonder at the sheer scarcity of material available on this man. For someone who has won 2 consecutive Olympic Golds, shouldn’t there be more information available?

“For my part, I have never begged for publicity,” Datt says- the bitterness clearly visible on his face. “I have never been the kind of person who would go and ask for my name and picture to be put in the newspaper. If you want to know why there has not been a story on me, you will have to ask the concerned people.”

Here, Datt pauses for a sip of water- his hands shaking with the burden of old age. His caretaker, the only other human in the desolate house, steps forward to wipe some of the water he had dropped on himself. Regaining some of his vigour, Datt repeats his initial question.

Because I think Keshav Datt’s story is important, I answer him.

“But I asked you not to come. Can’t you see I am sick?” he argues, the irritation clear in his voice. He points at his caretaker and continues, “You spoke to her. She told you to come. I did not.”

What makes Keshav Datt so averse to having his story told? I put this question to the veteran in an effort to stem some of the hostility. “Because my story is not important,” he replies.

A second’s pause here before going back to the timeless question. “Why are you here?” he insists urgently. I try to steer the conversation as I ask him about his teammates. I made a passing reference to another prominent name of Bengal Hockey, Leslie Claudius. I asked whether he remembers what it was like playing alongside Claudius.

“Claudius is junior to me,” comes the reply. “Everyone thinks he started his career with an Olympic Gold in ’48 but he played only one match in London.” And as if to emphasise his own contribution, even more, Datt adds. “I played all the matches. I did.”

Nearly 70 years on, the name Leslie Claudius has definitely won the battle against obscurity, one that Keshav Datt has lost. And perhaps Datt realises this.

“Today’s sports fans- you ask your friends. They will watch a match today and tomorrow they will forget all about it. Where is the respect or appreciation in that?”

“You can play brilliantly on one day. Maybe they will remember you for it for a few months. And then what? Now tell me, is my interview more important than that?”, Datt concludes- the tone of finality clear in his voice.

My attention turns to the bookshelf opposite him. The rare editions of various sports-related books would definitely catch the eye of an avid reader and a sports enthusiast.

“I used to have a file of newspaper clippings,” Datt says when he catches me looking at his books. “Now, I have no idea where they are. They’re probably stolen. If they were here, you would not need to talk to me,” he adds looking wistfully at the bookshelf.

“You have to let me sleep. I am an old man. I get tired easily,” he says. “There was a time I played, a time I was active. That time is gone. Now I am all alone.”

The melancholic tone with which he spoke the last few words at least solved the mystery of his hostility. Years of obscurity and under-appreciation had made him resist any sort of attention. He had become highly averse and suspicious of the limelight after being shunted to the sidelines for so long. As a two-time Olympic hero who had more than paid his dues, Keshav Datt’s story deserved the centre stage at least once before he too is lost- just like the file of newspaper clippings he could faintly recollect.