From beating Milkha Singh to losing a leg: The downfall of an Olympian

His contemporary, the legendary Milkha Singh has often been quoted as being deeply respectful to the man who was both his competitor and his training partner. The adage “rags to riches” is quite a popular one but there exists a parallel flow of events. Sometimes, things happen the other way round with absolutely no explanations regarding how and why. Most often, it is the result of abject apathy by the concerned parties. At least that was the case with Olympian and Arjuna Awardee Makhan Singh.

They say the higher you rise, the greater is your fall. This is the story of a man, a brilliant athlete who was relieved of his day in the sun rather crudely. By the end of his life, athlete Makhan Singh’s condition was pitiable.

A story goes that Makhan Singh had once told his family that he would be more famous after his death. His words rang quite true because he lived most of his life in relative obscurity and penury despite winning an Arjuna Award. His main claim to fame, however, is that he remains the only Indian athlete to have ever beaten the legendary Milkha Singh. 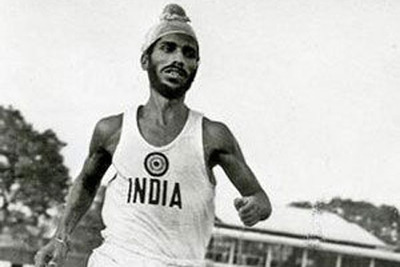 The year was 1962. The venue-Kolkata. The National Games were on in full swing that year with several predictable results in the way. But something happened that stunned the athletic world into silence. In the 400m race, Makhan Singh defeated Milkha Singh in brilliant fashion.

While this alone should have been enough to cement his stature as an athletic great; it should have guaranteed him all the respect that a sportsperson deserves. For a while, it seemed like that was exactly the case.

Following his national success, he also won a gold medal in the 4x400m relay event and a silver medal in the quarter-mile race in the 1962 Jakarta Asian Games. In 1964, he was awarded the Arjuna, the country’s highest award for sporting excellence, for his achievements.

That was when things went downhill. Brought back quite rudely to reality, Makhan Singh realised that sporting achievements do not always get their dues in a country like India. With no financial help from the Government, Makhan Singh had to take up work as a truck driver to make ends meet and support his family. A terrible accident after this resulted in the loss of a leg thus effectively putting an end to his athletics career.

Why did things turn out this way for Makhan Singh? For starters, before blaming figures of authority for not providing adequate monetary effort, we should introspect about India as a country where achievements are not honoured. As a nation, we love complaining about the lack of medals. But have we, as supporters of sport, done enough to take care of our athletes? Why must they be lost in obscurity in spite of their achievements? Is our memory really that week?

The other burning question has to be regarding the reason why a better system of pension for erstwhile Indian sportspersons had not been put in place till then. Ever since Rajyavardhan Singh Rathore took up office as the Sports Minister, he has made public announcements about helping out athletes in need. Steps are definitely being taken to avoid another incident like Makhan Singh’s but is it really enough? Only time will tell how much these current regulations will hold.

The erstwhile Sudedar Major of the Indian Army.preferred a quiet life. He never went out of his way to ensure that extra bit of limelight. Maybe if he had, things would have turned out differently.

His contemporary, the legendary Milkha Singh has often been quoted as being deeply respectful to the man who was both his competitor and his training partner.

‘If there is someone I feared on the track, it was Makhan. He was a superb athlete, who brought the best in me. I would rate him even higher than Pakistan’s Abdul Khaliq. We stayed and practiced together for years. I don’t think we’ve seen any better competition in the 400m event in India after that,” Milkha Singh has been quoted as saying.

And though the Flying Sikh’s name has been embedded in the history of Indian athletics, Makhan Singh’s name is sadly lost. It is indeed a tragedy.