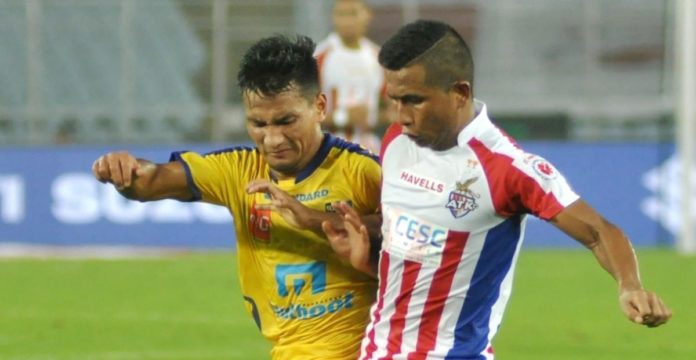 Two-time runners-up Kerala Blasters started their ISL 2019-20 campaign on a winning note as they defeat ATK 2-1 at the Jawaharlal Stadium in Kochi.

In a replica of the last season, two-time champion, ATK were shocked by the Yellow Army in the opening match in their home stadium with both goals by Bartholomew Ogbeche in the first half after Javier Hernandez gave an early lead to ATK. With the win, Kerala Blasters have now taken three points and stand at the top of the table.

ATK dominated the match at the start with an early goal as the Irish midfielder Carl McHugh strike an unbelievable volley into the net, just six minutes after the kickoff.

Javier Hernandez delivered the freekick into the box, where Agustin Iniguez fended off his marker to get a cheeky back head to McHugh, who scored the opening goal of the 2019-20 ISL. The goal also turned out to be the 100th goal for ATK in the Indian Super League.

Javier Hernandez missed a golden opportunity to put Kerala Blasters on the backfoot when ISL newbie goalkeeper Bilal Khan came completely off his line to stop Hernandez but the centre-back got away and had an open goal to aim for but the defender Gianni Zuiverloon managed to put his leg to the shot as Bilal caught the ball.

The hosts, Kerala Blasters were back in the match with Bartholomew Ogbeche scoring an equalizer on the penalty in the 30th minute. The yellow army were awarded with a penalty after Jairo went down in the ATK box as Pranoy Halder slightly tucked Jairo’s. Ogbeche then stepped up to take the spot-kick and Arindam guessed correctly but the stretch was not enough to prevent the ball from striking the back of the net.

A double strike from Bartholomew Ogbeche put the home side in the front, right at the stroke of halftime. Ogbeche connected with the ball for the first time in the ATK box and fired it right at the back of the net with no chance for the keeper to save the ball as the 65,000 crowd at the Jawaharlal Stadium in Kochi went frenzy.

ATK missed a golden opportunity to equalize in the 60th minute as there was a complete melee at the goalmouth with Roy Krishna unable to punch the ball behind the keeper. ATK had knocked the door several times in the match but ended up ruing these their misses.

The home side finally earned themselves some breathing space when the Referee blew the final whistle at the end of the 95 minutes with 5 minutes of injury time as they closed the opening match of ISL 2019-20 with a 2-1 victory.

With this victory, Kerala Blasters narrows their head-to-head record with ATK to 4-3 in the 13 matches they have faced each other with 6 draws.