A scintillating 48-ball 89* from Shafali Verma and three-wicket haul from Manali Dakshini helped India C register an eight-wicket win over India B. 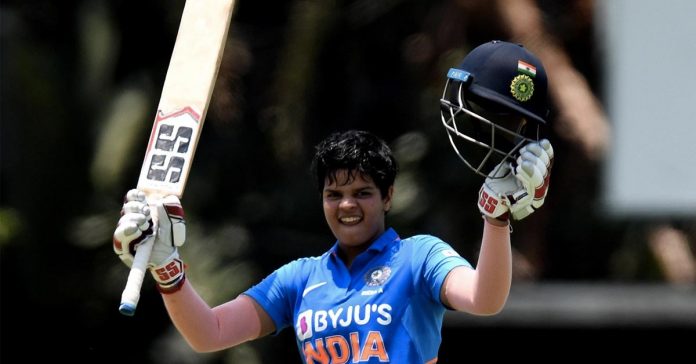 A scintillating 48-ball 89* from Shafali Verma and three-wicket haul from Manali Dakshini helped India C register a comfortable eight-wicket win over India B in the final of the Senior T20 Challenger Trophy at the Barabati Stadium in Cuttack on Friday (January 10).

India B won the toss and opted to bat first. It became a ritual for the captains to chose batting after winning the toss and experienced Smriti Mandhana, the India B captain was no less. On the other hand, India C captain Veda Krishnamurthy lost the toss for the very first time.

The underdog, as well as, inexperienced India C had a great start. They started with the spinners from both ends and veteran Rajeshwari Gayakwad successfully dismissed Smriti Mandhana in the third over where Krishnamurthy took a well-judged catch at extra cover.

Vanitha VR, however, showed some good batting throughout the tournament. She hit Gayakwad over mid-off, before smashing consecutive boundaries off Arundhati Reddy. But, once again she failed to carry forward her flying start. It was Hemalatha Dayalan whose wide ball left her stumped for a 17-ball 25.

Jemimah Rodrigues once again failed to score big. In-form Richa Ghosh (15), (10) and R Kalpana (4) were also dismissed by Manali Dakshini. She certainly made her return to the playing XI a memorable one after being dropped for the final league game. Her consistent bowling, left India B struggling in the middle until Pooja Vastrakar showed her calibre.

At 79 for 6 in 15.1 overs, India B needed some firework to post a decent total on the board. Having walked in to bat in the 13th over, Pooja Vastrakar started taking on the bowlers with ease after taking some time to settle in. She smashed three fours and three sixes to finish with a stunning knock of 43* off just 22 balls.

Verma hit all over the park – be it over the cover, mid-off, mid-on or straight over the bowler’s head. She amassed 20 runs in the final over by Tanusree Sarkar and took India B to a decent total of 131 for 6. Vastrakar and Shikha Pandey stitched an unbeaten 7th wicket partnership of 52 runs off 29 deliveries.

India C started the chase in the same manner. The young sensation Shafali Verma started hitting within no time. She smashed a total of eight fours and a six in the power play, as India C reached 58 runs despite having not-so-good first two overs. However, she broke the shackle by hitting four boundaries off Shikha Pandey in the third over.

After Pandey, Shafali chose Tanuja Kanwer and collected 18 runs in her first over which included three boundaries and a maximum over mid-wicket. Smriti Mandhana looked clueless in the middle as her all plans foiled by Shafali Verma. She brought up her half-century in just 27 balls, the second fifty in the tournament after India A’s Priya Punia.

However, Madhuri Meheta couldn’t do well and her struggle came to an end with the run-out. She scored 20 off 30 before her dismissal in the 10th over. Her dismissal brought Veda Krishnamurthy in the middle. She smashed a quickfire 8-ball 15 before Mandhana took an easy catch at mid-on and sent her in.

On the other hand, with Shafali’s hard-hitting, the game never looked out of control from India C. She smashed a few big hits later as well and finished the game in style. A boundary over mid-off off Vastrakar by Shafali took India C to the finish line in the 16th over and the youngster remained unbeaten at 89 off just 48 balls, including 15 fours and two big sixes. Shikha Pandey took one wicket for India B.

If anyone qualifies to be called a legend in Indian hockey after Dhyan Chand, it's Balbir Singh Senior, said iconic Milkha Singh condoling the...
Read more
130,753FansLike
12,113FollowersFollow
7,142FollowersFollow Team Bridge - Modified date: May 21, 2020
ISL 2019-20 saw a record number of goals being scored on the pitch, while off it, the fans helped set several landmark goals on the digital front.
Read more