Indian Women’s Compound Archery team created history after the eves were ranked No. 1 in the world a few days ago. Jyothi Surekha Vennam, Muskan Kirar, Divya Dhayal and Trisha Deb all played their respective part in India’s path to glory.

The Bridge happened to indulge in a brief conversation with Jiwanjot Singh, one of India’s coaches and the mastermind behind Jyothi and Trisha’s illustrative career. Although he feels the nation is marching in the right direction, he also points out a few areas which should be taken care.

“It is a tremendous achievement because this is the first time. We have never achieved the first position in Archery. In 1973, The Archery Association of India came into existence, and after 45 years India is at the top, it was a big day!” said Jiwanjot Singh on Indian Women’s latest achievement.

The Women’s compound team won the silver medal in the 2018 Antalya World Cup, losing to the French team in the final clash. “All the countries have the same equipment, and each of them came with equally good preparations. The final match was not easy; it was a neck to neck competition. We scored well, and they also scored well, the difference was just by a single point.”

The overall scoring of our Archers has improved over the years. Previously, we were ranked below ten but now India always finds a spot in the top 5 if you see the results each year.

A masterstroke which shaped Trisha’s career

Jiwanjot Singh is not just a coach; he is also a mentor and more importantly a person who has a far-sighted vision and a brilliant ability to identify talents. The man from Punjab made a slight amendment to Trisha’s game which changed her career forever.

From being a team reject to becoming a top Archer and winning two medals at the Asian Games, the lion’s share of the credit goes to Jiwanjot. He recalls a few moments with Trisha Deb during the interview.

“She (Trisha) joined my academy in Bangalore; she was a recurve archer. The Korean coach refused to take her as a part of the team. She called me and paid a visit to my centre, and then I changed her bow from recurve to compound. She worked very hard and earned a berth in the University squad. Soon she made the cut for the State team and won many competitions.”

He added, “Then she got a place in the National team for Asian Games and won two Bronze medals at the mega event. She was the only Archer to win two medals back then! But the road doesn’t end here for Trisha; the ultimate fight is the Gold medal.”

Last year, a dejected Jyothi came up to her coach Jiwanjot Singh and said, “Sir, I never got a medal in a World Cup.”

In reply, he promised that they are going to work hard and rectify the errors. The little chat worked wonders as Jyothi won six medals this year. A few words of motivation coupled with hard work and guidance can make a huge difference in an athlete’s performance.  But she also had to make her way to through the ranks to reach the top level. 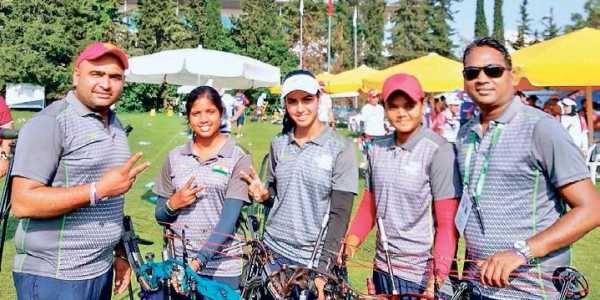 Jiwanjot is a person who observed Jyothi from close quarters and even witnessed how her career graph steadily took an upward slope.“She was a talented Archer; she finished her engineering. She did well in many tournaments, and her score was 667 when she joined the National camp. Following that, she broke the National record many times, now she scored 705, her career best. Both of them have been in the national camp from 2013 and are doing very well, they are working very hard,” said Jiwanjot.

They (Trisha and Jyothi) follow the full schedule. It doesn’t matter if it’s rainy, or hot or cold. They are very well disciplined archers, that’s the reason for their success!

Considering the records in the past few editions of the Asian Championships, Jiwanjot feels that India is a probable Gold medal contender in Archery at the 2018 Jakarta Asian Games. But India needs to leap a mile longer to script a podium finish at the Olympic Games.

“We have a good chance in the Asian Games this year. In 2013, 2015 and 2017 we have won the Asian Championships and have been in and around the top two ranks during those events, and now the Women’s team is at the top of the rankings. The Mixed team of Abhishek and Jyothi are also ranked No.1. Overall, we have bright chances of winning the Gold Medal.”

“Compound is not a part of the Olympics. In Recurve, we have good Archers in the likes of Deepika Kumari and Atanu Das; they have won world cups and International tournaments. But they need a lot more practice and mental training. If you see the scoring graph of Deepika, she had scored 346 in the Olympic trials. After that also she scored 340, 345, which were some of the highest in the world. But she cannot perform well at the Olympics. This is due to the mental pressure. “

Mental trainer- The need of the hour

Jiwanjot feels that a mental trainer needs to be appointed for the Archery ahead of big-ticket tournaments, to ease the nerves and clear the minds. He said, “That is the reason why I requested the Association to hire a mental trainer or a psychologist. We have many mental trainers, but they are essentially generalised. We need a person who will specifically work with the Archers.  Shooting and Archery are the sports which involve mental aspects.”

“We need a lot of improvements. The problem is that we do not have a federation for more than eight years. If you see, the federation is the head of the family, and if that’s missing, there will be no discipline nobody is there to think about the pans and the Archers.”

“We need long-term plans for the Olympic medals, and that’s possible if only we have a proper federation. The current association which runs the show is a derecognised one and works without a President or a governing body,” Jiwanjot says

“Our government, they are giving funds to other federations, the Sports Authority of India (SAI) is also helping us by sponsoring equipment, camp guides and kits, but it should start from the academy level so that the beginners can join the academy and avail the pieces of equipment provided by the Government. The Khelo India Games is providing free equipment to the junior and sub-junior athletes. This will be beneficial for the future.”

“I am a coach, I can train the players, the players can perform, but a Federation needs to exist which can take care of camps, our needs, our problems and discuss it with the Government,” he adds.

Dependency on foreign coaches can backfire

“We have coaches who are working hard, and for that, we have achieved good results at the world level. But we should change our Indian mentality because in every sport we depend on our foreign coaches,” he says.

“We never believe in our Indian coaches. I was working in Indonesia for the International Olympic Committee; they sent to Indonesia as a foreign expert for three months.”

“After that, I worked in Saudi Arabia as a head coach. When they are calling us for coaching, why does the Indian Government not believe in us? We are the people who are taking the Archers from the grassroots; we have groomed them from the beginning.”Not only Archery, but this has also been the case in other sports too, we tend to believe that foreign coaches are the ones who are going to make a difference.”

“If you are taught to control the gear with your left hand during the driving lessons, you become habituated to that. But if suddenly, after 5 or 10 years, a foreign coach comes and advises to change your technique and use your right hand to change the gears, it is not possible. We know the feelings of Archers and the fundamentals. If we are ones responsible when they are scoring as high as 350, what’s the role of a foreign coach?”

All said and done; it is safe to conclude that Jiwanjot’s presence has bettered the state of Indian Compound Archery monumentally. We do need more coaches like this.

When Deggie Cardoza’s coach put him on the field as a substitute for the last 10 minutes of a football match, the...
Read more
130,898FansLike
12,126FollowersFollow
7,144FollowersFollow