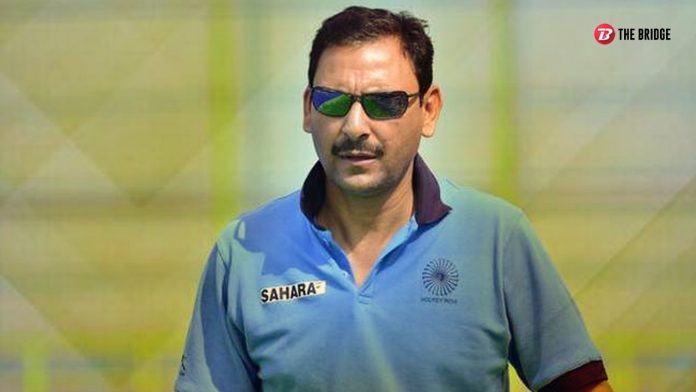 Before starting on any kind of project, there are two things that you must establish. Firstly, set your benchmarks. Firmly make your expectations clear right at the onset of your work and keep reinforcing what your targets are. The players should be completely clear as to you think they are capable of. After that, you figure out the best way to achieve it.

Presently, there is no doubt in any one’s mind as to how important this year is for Indian Hockey. For 2018, I have been given the responsibility of the Women’s National Hockey team of the country. What I want to do this year is place the team firmly on the map. I want the world to know that these Indian girls are capable of achieving so much more than they are given credit for. It has been many years that we have mulled upon the collective talent that is housed in this squad. For a long time, they have been threatening to come on their own, simmering on the edge of brilliance. And what better year than to finally achieve all those coveted goals than this?

As a coach, it is always important to keep reminding yourself that skills and tactics are just a small part of building a player and by extension-a team. When I took over this responsibility of being the coach of the Indian Women’s Hockey squad, I had a Herculean task ahead of me. I had one month to prepare these girls for a major tournament.

Given the past few results before the 2017 Asia Cup, the morale within the dressing room was quite low. As such, it would have been quite foolish to try imposing your strategies on the team. For one, there wasn’t nearly enough time for the girls to unlearn everything they knew and accommodate newer knowledge. Secondly, even if there was time, there are several factors which go into making a team more than the knowledge of strategic gameplay.

So with that little time in hand, all I concentrated on was building the team-not strategy wise but psychologically. I remember I sat them down in a room almost every day and plagued them with presentations. The topics varied from motivation to teamwork to looking at strategies of other world-class teams. More than commenting on how they played or executed plays in training, I focused on a one-to-one and team counseling of the players.

During this period, I usually relied on drawing experiences from my own life, particularly the mistakes. I felt that I was in the best position to advise the girls on avoiding few specific disasters because I had gone through them. I taught them what a bane overconfidence was and how to never fall down that hole.

I made sure the mood was right. I took care to see the players were comfortable with each other. And the result was there for us all to see. India won the Asia Cup and what’s more. They defeated teams like China and Korea who have always imposed their dominance in tournaments like this.

Now if you ask me what my coaching philosophy is, it’s quite simple. For me, it does not matter who scores the goal in any particular game. I do not want this squad to turn into a one-woman show because if that happens, we’ll have no option to fall back on in case Option A fails. Take Rani Rampal for instance. Earlier, the strategy was such that everyone used to look at her to rescue the team in dire situations. Granted, she has shouldered that responsibility exceptionally well but, do you think that’s the reason she is a captain?

Look at the Games lately. Almost all of them have someone different contributing to the scoreline and Rani is hardly the only player to carry the team. Rather, she has taken on a bigger responsibility these days. She has turned into a playmaker. She has become the backbone of the team but in a very different way. She paves the way for other players to score.

That is the mark of a true leader and a team player. For me, setting up the goal is actually bigger than scoring it because the former is a very noble thing to do. You give up adding value to your personal statistics and focus instead on what is good for the team. That only comes when you value the team more than yourself which again requires the right attitude. And how does one get the right attitude? By approaching a game in ways beyond simple strategy.

Also read: Kuldeep Malik: Bringing out the champions in grapplers

What I want to do is change the mindsets of the players. I want these girls to know that giving up easily is not something that I would tolerate. Every player in this team has a lot to contribute and every little contribution is indispensable. As such, it is important to keep on encouraging them. In general, women in sports have had to go through a lot more than their male counterparts to get to where they are. While they have also had to struggle in their own personal capacity, what men rarely face is a stiff scrutiny from society who thinks that sports aren’t for girls.

For them to be free enough to perform their very best while on the turf, a little extra care is needed. And that little extra is often ignored which ends up dismantling a lot of hard work that may have been done otherwise.

I do not want to concentrate on what one particular player has achieved over the course of the five months that I have been associated with them. They have taken steps forward- some of them have taken bigger steps than the others but each player’s progress cannot be held on the same scale. Like I said, every little contribution is important and must be valued and encouraged adequately. This kind of encouragement should extend even beyond the playing field. In fact, any improvement or change in their personalities should receive that much value so they are motivated. All of that adds to building up self-confidence.

Once that is in place, only then can confidence grow within the ranks, When they are confident in their own abilities, they will form a better team. Ultimately that is what matters.

In modern hockey, how many hours do you think players put in actually playing and training for their tournaments? A maximum of two. The rest of time is spent giving attention to all these other things. You have to figure out how to use science to enhance the biometrics of each player. The right diet, the right mindset, the right bonding- they’re as important as the right play, don’t you think?

I began by saying that it is always important to set your benchmarks and targets before embarking on any kind of preparation. For 2018, I have made my expectations clear to these girls. After watching these girls play, I am quite clear about wanting a Gold at Gold Coast next month and at the Asian Games. We must qualify for the 2020 Olympics. My team is, currently ready for us to realistically aim for that.

For the World Cup, I have chosen to take it step by step. The first target in the tournament is to reach the semi-finals. At that stage, it is anybody’s game. You are one step away from achieving what your dream is, one step away from winning a medal. And that is the most crucial stage of any tournament.

I want these girls to reach that stage and keep their cool when they do. I want them to understand that pressure and own it. Winning a medal at that major tournament in the face of stiff worldwide competition, that would be the ultimate abetment to self-confidence that I was talking about.

These girls have to believe that impossible is nothing. They must abandon their fears and play the game of hockey they are capable of. If you’re constantly plagued by fear, that will plague on your mind and ultimately limit your performance on the turf. Brave is the one who plays without thinking about the outcome of the match. When you have the burden of expectations from an entire nation riding on your shoulders it’s hard to not give into the pressure. The one who conquers that fear, however, conquers the world.

When Deggie Cardoza’s coach put him on the field as a substitute for the last 10 minutes of a football match, the...
Read more
130,962FansLike
12,136FollowersFollow
7,150FollowersFollow