Dronacharya of Varanasi Basketball believes “We shall overcome someday” 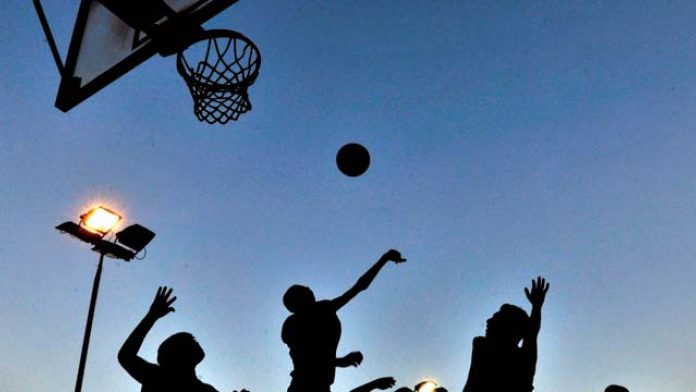 The gentle waters of the Ganges lace the shoreline of one of the ancient cities of India. Chants are heard from the narrow, dingy alleys, and the temple bells ring in a frenzy as dusk descends. The town is full of pilgrims coming from every nook and cranny of the world to seek spiritual serenity and calm amidst the din and clamour that resonates through the bylanes of Varanasi.

Little can be guessed about how through the veins of this city dribbles the spirit of raw basketball fever, and there is talent lurking everywhere.

Religion forms the backbone of this holy city with devotees sprawling the length and breadth of Varanasi, but what is most interesting is that most of the best basketball players in India stem from this temple city.

As the temple bells toll and the ghats glow brightly with the ritual of evening ‘araati’ and the all-familiar age old rhythm trespasses the air of Varanasi, somewhere an unfamiliar and odd beat of feet stomping over courts and basketballs bounced on the ground resonates and interrupts the music of a long-standing religious tradition.

All of this unfamiliar music stems from the northwest of Varanasi where cradled a few kilometers away from the banks of the Varuna river, the Raja of Bhinga Udai Pratap Singh founded the Udai Pratap (UP) College over a hundred years ago and history patiently waited in it’s corridors to unravel after several years.  With zero conception in mind, the Raja of Bhinga established the UP College which is now hallowed grounds for any basketball player in India.

It was in 1986 when the Rajiv Gandhi government came up with the NSPC Programme that steered India into sporting glory.  Some 86 colleges and schools were adopted all over India to hone sporting talent under this scheme.

Udai Pratap College, Varanasi was also one of those adopted colleges in the motley bag. In connection with this, the ‘Father of Indian Basketball’, Amarjeet Singh, then an integral part of the Sports Authority of India, came to UP College in April 1988 and what began thereafter is like a fairy-tale for India.

Staying aloft in the mountain paradise of Jammu and Kashmir, sheltered by pines and firs and apple orchards, the Pir Panjal and Hindu Kush stand as witness to one man’s extraordinary glory in shaping up Indian basketball. Amarjeet Singh, the grand old jovial and turbaned man of basketball spoke to The Bridge, from his Baramulla home where he still spends his evenings tutoring kids about the nuances of the sport.

Amarjeet Singh recounts how basketball dribbled into the city of Shiva and talent splurged from everywhere. Upon his arrival in the town, he realised first and foremost, “There was simply nothing for basketball when I joined. It was zero. We had to start from scratch.”

The College that completed its centenary year in 2017 had a ground that was fashioned into a basketball court albeit on nontechnical terms and it wasn’t constructive for the budding talent relays Singh.

Much to his shock Singh reveals, ” In my first year as coach in UP College, I was just given 2 players by the Sports Authority of India.”

Not let down by this harsh statistic, Amarjeet Singh launched an expedition to hunt out new talent.

“I looked among the local kids and targeted the tall boys in 6th or 7th standard and persuaded them to come for basketball practice and give it a shot!”

“While roaming around in the bazaar or wondering in a gully if I spotted someone tall, I’d immediately go up to them or even go calling at their homes and try to convince them to play.”

But with the Indian mindset, especially in Varanasi, this is no easy task.
Growing up amidst proverbial truths like, “Likhoge, paroge toh ho jaaoge nawab, Kheloge, kudoge toh ho jaaoge kharab.” , the parents of the tall kids were in two minds about yielding to the Coach’s pleas.

But the staunch man from the border district of Baramulla wasn’t one who’ll let such proverbs hinder India’s rise to sporting glory and has promised to himself that someday he’ll prove the reverse of the popular saying! Players like Amit Singh who represented India later was one such find!

The hurdles were several and Amarjeet Singh tackled them fearlessly with the school administration by his side. Many eyebrows were raised when he picked kids at random and brought them to play but Singh kept his faith in those faithless situations and serenely replied, “Hum honge kamiyab ekdin, dekh lena! (We shall overcome one day, just wait and watch.)”, the passion and grit echoing in his voice.

And after that the dots began to join themselves and laid out a path headed to basketball glory with Amarjeet Singh at the helm. After a brief span of time, the organizers and other well-wishers gathered and recognizing Singh’s tireless work to promote basketball, gifted UP College with a new and better court.

The laurels started streaming in when the basketball team won at the Sub-Junior level and the State Championships.

Another brilliant thing was waiting in the wings to happen in the 1990’s when the girls of the neighboring Rani Murar Kumari Balika Inter College, had their interest piqued in the game and came across to watch and longed to practice too! In the orthodox setting of Varanasi, this came across as outrageous and quite revolutionary.

“Many people came up to me and pointed out how girls of this place have to abide by a certain tradition and they cannot just play basketball with the boys.”, Singh remembers.

” Then I told them that if girls do come asking for training, I have no right to refuse them. And in sports, the gender doesn’t matter so much. They are all India’s children, and if they come to me I will teach them! “, Singh asserted.

Back in the 90’s, this was quite a stand to take and when spectators started coming in to watch the girls at practice initially, it did seem to be a little messy. But soon the practice became a routine and the oglers withered away and so far, no indecent incidents have taken place there!

From that stemmed the Singh sisters-Divya, Akansha, Prashanti, Priyanka who came to him as young 10 or 12 year old’s. Recognizing their talent from an early age, Amarjeet Singh honed them and they went on to lead Team India in the future! With around 80 kids under his wing, Amarjeet Singh wrote history for Indian basketball. Winning some 8-9 trophies out of the 10 available in the State level became a habit for Singh’s players during his 19 year tenure as coach in UP College. He proudly states, ” In UP State, I think some 230 trophy wins have been clinched on my watch!”

Equally deft in volleyball and basketball from a young age, Singh was a NCC cadet and planned to be a Commissioner and has even been a recipient of an award from Indira Gandhi herself. Being in National Institute of Sports, Patiala, Singh was posted at Shimla for a few months at the beginning of his illustrious career.

Singh sees a bright future for Indian basketball ahead with the rise  of international competitions and the coming of good coaches here to train the players. As an ex-Indian coach (2004-05) of the Men’s team, Singh certifies the improved conditions of the sport.

“It was in the hands of Harish Sharma, the secretary of BFI, that basketball was uplifted. Earlier we’d have to sleep on floors of schools or dharamshalas when we were on tour. But once Sharma came, we had funds and we and the players were put up in hotels.”

With the junior men’s team headed to Bangkok and the girls team equally shining internationally, it’s a great time for basketball in India believes Singh. The facilities of having indoor courts is also an added boon and with tall and talented players streaming , the future looks bright!

“To bring basketball at par with cricket or even popularize it, I think introduction of leagues will be very helpful! IPL, UTT things like that have promoted sports in the past. We need something  for basketball too.”, says the amiable Amarjeet Singh.

For a man who has been solely responsible for molding ordinary kids into national basketball players by rummaging through the length and breadth of Varanasi, Amarjeet Singh is not your everyday human being, humble however he may be. He was nothing short of an angelic presence in the temple city and possibly the greatest boon that Indian basketball needed unknown to itself!

Gokulam Kerala unhappy with Kerala Blasters wanting to use ‘their’ stadium The Bridge Desk - Modified date: June 4, 2020
Ever since news broke out on Thursday that Indian Super League (ISL) franchise Kerala Blasters FC will shift their home stadium from Kochi to Kozhikode, there has been a complete ruckus on social media. Will they play all their home matches at the EMS...
Read more