American soccer coach Bil McCartney once famously said, “All coaching is, is taking a player where he can’t take himself “. What success is, for an athlete, if not paired with effective coaching? One cannot help but agree with the veracity at which McCartney asserted his view on coaching athletes. Coaching is no convoluted affair, unlike what most people presume.

The word ‘coaching’ fittingly conjures the image of a teacher educating his pupils, abandon my claim, if you wish. A sporting landscape is no different, visualise the image of an athletics coach grasping every nuance of the sport with unmatched clarity and ensuring his compliant pupils abide by a strict training regime. Brought up in an athletics family, Satyapal Singh dedicated his youth to his otherwise far-flung dreams of playing at the national level, but to vain. He now takes pride in coaching elite athletes with physical impediments. Unlike a Gopichand or a Mahavir Phogat, Satyapal embodies the truth behind the area of coaching disabled athletes still lacking, compared to its counterpart in non-disabled sport. He might not have born under a lucky star as most sought-after Indian coaches, but his achievements surely make him one of the most successful coaches that the country’s sporting fraternity has ever produced.

But how often have we had the pleasure to relish a path that Satyapal has trodden upon? Should we quit if a constant financial strain is pulling us down? Satyapal would disagree at this juncture, he trains athletes but sacrificing his own meagre savings. And despite lack of government support, he does not complain. With 54 international medals at World Championship, Asian Championship, Commonwealth, and Paralympic Games, one wonders why has the country’s most deserving coach slipped under the public radar?

Para-sports draw a narrow coverage that often limits the athletes’ sacrifices made in pursuit of achieving athletic glory. But obstacles are a critical facet of their lives and the young shining faces at the Jawaharlal Nehru Stadium have learned to embrace it. Coach Satyapal is regular on the grounds of the stadium, helping them get an inch closer to making a mark in the realm of sports. Satyapal begins his training at 4 am lasting four hours before he heads towards his college. Then comes another day, and with it another rigid course of daily routine. Satyapal has kids to look after and a wife, but he chose a pitch not many can bring to fruition.

The US, according to the statistics by the US Athletics Association, spent an average of $1 million on each 2012 London Paralympic medallist. India stands nowhere, as the Indian para-athletics contingent received no money in athlete’s funding. There is no basic infrastructure, let alone sports funding. The practise area devoted to para-athletes at the Jawaharlal Nehru Stadium arouses spells of astonishment, for one ponders why there is no ramp area for a wheelchair-bound or a handicapped athlete to enter its premises. With no access to dressing rooms, these athletes have come to make peace with training in a worn-out field on the outskirts of the premises. As we beam with pride at the sight of these promising talents fighting not just societal, but a physical hindrance to reaching the pinnacle, coaches like Satyapal are constantly cruising past the barriers that keep them within bounds and guiding them to rise with flying colours. 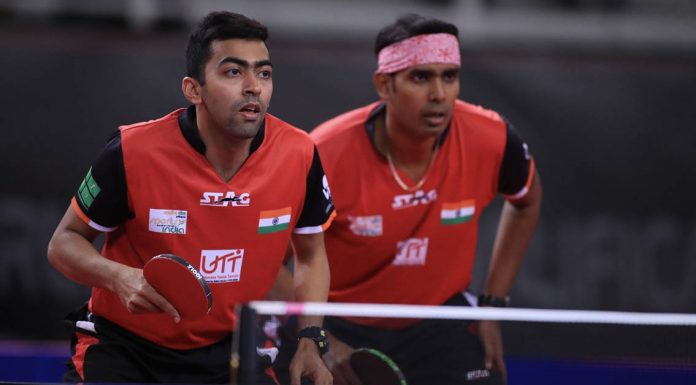 Sohinee - January 24, 2020
It was a disappointing day at Gondomar, Portugal where both the Indian men's and women's table tennis teams are playing the World Team Olympic Qualification tournament. After the news came in about the women's squad suffering a defeat against Romania, the fifth-seeded...
Read more