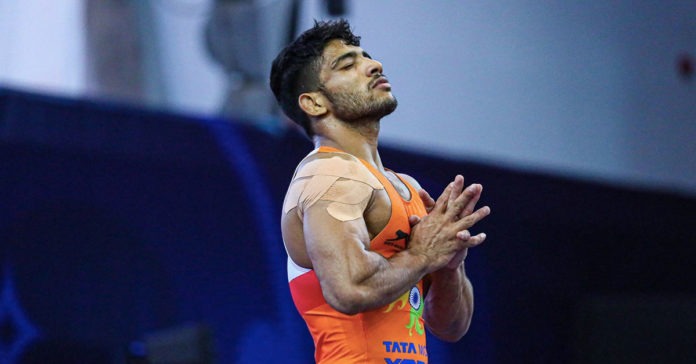 On Wednesday, 22-year-old Ravinder bagged the silver medal at the U23 Wrestling World Championships in Ulaanbaatar, Mongolia. The youngster lost 3-5 to Kyrgyzstan’s Ulukbek Zholdoshbekov in the 61kg final. He this became the fifth Indian overall, and first Indian this year, to claim the second prize at the U23 World Championship.

Ravinder was on action on Mat B on Saturday night, up against the formidable Kyrgyz. The first round saw both the grapplers taking a cautious approach. However, at the end of the first period, it was the Indian who had a slender lead thanks to a passivity point.

Early, in the second round, the fight was paused as Zholdoshbekov needs medical attention. As it resumed, the Kyrgyz grappler made a big move and pocketed four points and took a three-point lead.

In the third and final round, there were some tense moments as Ravinder, trailing 1-4, upped the ante and tried to enforce a comeback. With seconds left, the Indian brought the gap down to 3-4 but a failed challenge resulted in an additional point for the eventual champion which sealed the result.

Jyoti loses in semis, to fight for bronze

Elsewhere, earlier in the day, Jyoti lost in the semis of the women’s 50 kg category. The Indian grappler made it to the last four with a big 12-1 technical superiority win over Moldova’s Maria Leorda. However, in the semis, she was beaten 15-4 by Japan’s Kika Kagata. Jyoti had taken 4-0 lead early on but her opponent stormed back with 15 straight points to win the bout by technical superiority.

Share
Facebook
Twitter
WhatsApp
Email
Previous articleThe Away View: Chennaiyin FC vs ATK — Krishna-Williams partnership, faith in Habas and more
Next articleFather’s death bereaved me but couldn’t stop me from playing for India | By Meerarani Hembram Abhranil Roy - January 20, 2020
The Indian Super League (ISL) has catapulted into the news for a number of reasons in the recent past, but the sheer nature of their operations has ensured it gets recognized as one of the most-talked-about leagues in Asia right now. Established...
Read more